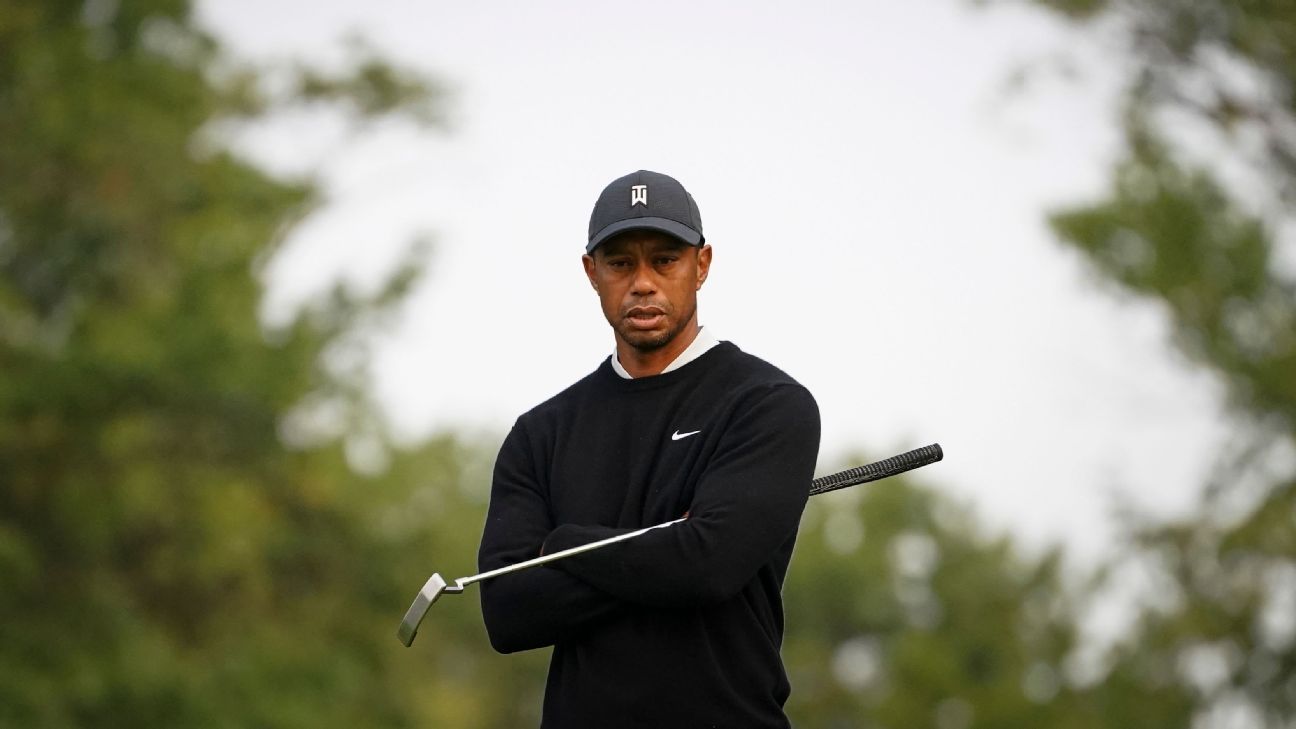 Nothing outside of the major championships was ever guaranteed for Tiger Woods’ when it comes to his schedule. And now even that is certain in the wake of the news that the Woods recently had a microdiscectomy procedure to alleviate nerve pain in his lower back.

Apparently Woods is already hitting balls after having the procedure Dec. 23. Still, Woods is out for the Farmers Insurance Open as well the Genesis Invitational, two tournaments he was expected to play.

At 45, Woods was already in a dubious spot having to deal with back stiffness that was inevitable in the wake of his 2017 spinal fusion surgery. Now the added wrinkle is recovering from the microdiscectomy procedure, which typically does not require an overnight stay but clearly takes some recuperation time.

We expected less before all this, and now that appears to be even more the case as 2021 moves on. With that in mind, here is a look at Woods’ scheduling possibilities.

The Arnold Palmer Invitational (March 4-7) seemingly would be the earliest place for a return, and that is just six weeks away — which would appear to be a stretch. Woods has had a lot of success at Bay Hill, winning eight times, most recently in 2013. Since then, his best effort was a tie for fifth in 2018, when he briefly contended during the final round. He has missed the tournament, however, the last two years. In 2019, he complained of neck stiffness; last year he skipped because of back problems. Having missed the last two makes it easier to skip it again. And playing out of the Bay Hill rough is no bargain. This appears to be a long shot.

The Players Championship (March 11-14) has never been a particularly great tournament for Woods, even though he has won it twice. Still, Tiger doesn’t skip the PGA Tour’s signature event unless he is physically unable. Given the back procedure was Dec. 23, there is a glimmer of hope.

The Honda Classic (March 18-21) is mere miles from Woods’ home, and he’s played the event several times over the years. This would have been a no-go if everything had remained normal, but now it is a distinct possibility. It is eight weeks away and three weeks prior to the Masters. Having a home game might be exactly what works best. PGA National is a tough place to work back in, but Woods might not have a choice. The following week’s match play event is no guarantee.

The WGC-Dell Technologies Match Play Championship (March 25-28) is two weeks prior to the Masters, and Woods likes that timing. He’s guaranteed three rounds in the round-robin pool format, and anything beyond that is a bonus. Two years ago, Woods tied for fifth at Austin Country Club, losing in the quarterfinals. He won the Masters two weeks later. Here’s the problem: He might not qualify. Woods is ranked 44th in the world and dropping. Can he remain in the top 64 at that point? Does he want to even risk the possibility of playing multiple matches if he makes it to the weekend? If not eligible, the Honda the week prior makes more sense. Crazy thought: Woods doesn’t qualify, and shows up at the opposite event in the Dominican Republic.

The week of April 3 is now circled. If Woods can’t make it back prior to then, can he return at the Masters? It’s not an ideal place to come back, but he’s done it before: in 2010 and 2015, the latter year having taken nine weeks off to work on his game. Woods hates to miss the Masters. The fact that he had an issue and seemed intent on getting it resolved as quickly as possible suggests he’ll do all he can to be in Augusta.

The move of the Valspar Championship from March to three weeks after the Masters (April 29-May 2) may help the Florida tournament land Woods. It was three years ago that, in just his fourth start back after the spinal fusion surgery, he tied for second, a shot behind winner Paul Casey at Innisbrook’s Copperhead course. The course is not far from home and is really well-suited to Woods. It’s also three weeks prior to the PGA Championship. The only question: Would he rather play the following week? If unable to play the Masters, this event would be a prime place to return, as it is more than three months away.

The Wells Fargo Championship (May 6-10) seems an either/or proposition for Woods, who last won the tournament in 2007 and then finished fourth in 2009. Since then, he has played the event just four times, with two missed cuts and a tie for 55th in 2018. Quail Hollow Golf Club has undergone several changes that perhaps don’t suit Woods. It might keep him away. Then again, if he wants to play two weeks prior to the PGA Championship, this would be the choice, meaning he skips Valspar.

For the PGA Championship (May 13-17), it is quite unlikely we will see Woods do what he did in 2019 — which is not play prior to the tournament following the Masters. Last year, his only start prior to the PGA was the Memorial, his first tournament following the pandemic shutdown. In 2012, Woods shared the 36-hole lead at Kiawah Island (South Carolina) with Vijay Singh and Carl Pettersson, only to shoot 74-72 over the weekend and fall well off the pace. Rory McIlroy won the tournament by 8 shots; Woods finished tied for 11th, 11 strokes back.

Two weeks after the PGA, two weeks prior to the U.S. Open. Jack Nicklaus‘ Memorial Tournament (June 3-6) in Dublin, Ohio, is in the perfect spot. Barring something unforeseen, it’s difficult to see Tiger skipping a tournament he has won five times.

The U.S. Open returns to Torrey Pines in San Diego for the first time since Woods’ epic playoff victory over Rocco Mediate in 2008. That was his 14th major title, and an avalanche of things have occurred over the past 13 years. But Torrey should be more to Woods’ liking.

It is difficult to see Woods playing between the Opens. He’s not likely to play the Travelers the week after the U.S. Open nor the John Deere the week prior to The Open. That leaves only the Rocket Mortgage Championship in Detroit, a place he’s never played. He hasn’t competed at The Open at Royal St. George’s in Sandwich, England in 18 years. He missed the 2011 tournament due to injury. He tied for fourth when Ben Curtis shocked the world in 2003. He entered just 2 back of Thomas Bjorn heading into the final round and missed a playoff by 2 strokes. (Woods, infamously, had a lost ball on the very first hole of the tournament, his drive into the rough not found in the allotted time; he made a triple-bogey 7.)

Remember when Woods was a prime contender to play in the Olympics? A year ago at this time, he was ranked sixth in the world, in prime position to be one of the top four Americans. Now he’s barely inside the top 50 — where he will need to be if he is to even qualify for the WGC-FedEx St. Jude Invitational in Memphis. The WGC falls perfectly for him, (It is a week following the Men’s Olympic golf tournament), three weeks following The Open and two weeks prior to the FedEx Cup playoffs. The big questions: Will he be eligible? And where will he be in the FedEx standings?

Woods wasn’t able to qualify for the Tour Championship in 2019 despite winning the Masters, nor was he able to do so last year despite a victory at the Zozo Championship. In the past three years, he has shown an inclination to play them all if eligible.

This year, the Northern Trust (Aug. 19-22) returns to Liberty National, where he withdrew after one round in 2019; the BMW Championship (Aug. 26-29) goes to a new venue at Caves Valley Golf Club in Maryland; and the Tour Championship (Sept. 2-5) is back at East Lake in Atlanta, where Woods won in 2018 — and has yet to return.

It’s the same story: Woods’ fitness, ability to practice and compete, will determine how much he plays in 2021. After missing two tournaments he was expected to play, and possibly more, it seems the most Woods could play prior to the FedEx Cup playoffs is 10 tournaments. It is difficult to see him playing more than that. And it might even be one or two less. As always, the focus will be on the major championships. From there, how he feels and his motivation to advance in the FedEx Cup playoffs will likely determine how much we see him.