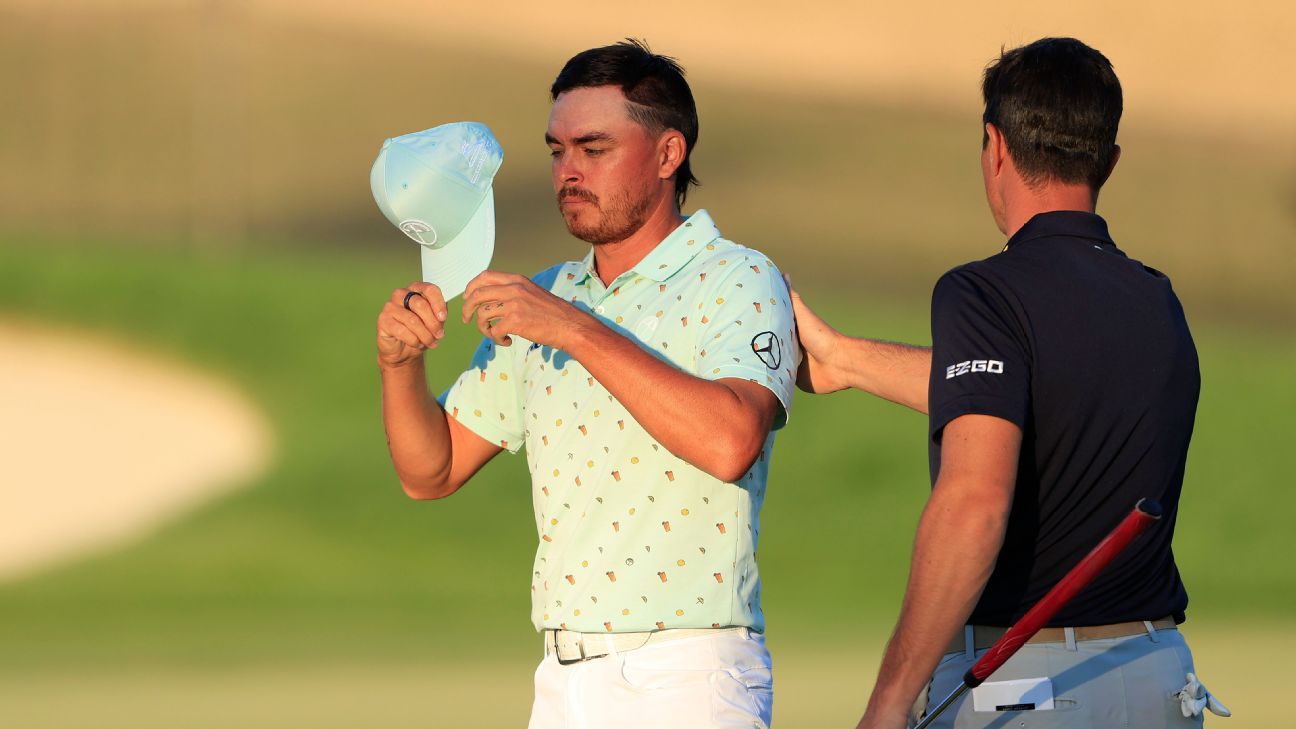 PONTE VEDRA BEACH, Fla. — One of the most-liked and popular players on the PGA Tour is struggling. He has sniped at his long-time caddie, whom he has known since childhood. He has admitted it has been hard not taking his troubles on the course home to his wife.

Rickie Fowler is no longer one of golf’s young stars; he is 32 now. He’s stuck on five PGA Tour victories, a number far below what was expected of him when he came out of Oklahoma State.

This week he returns to the place that was supposed to jump-start his career in 2015, the victory that should have catapulted him to more. That year, he won The Players Championship with a Sunday show. He shot 67 and birdied the famed 17th hole, with its island green, three times — once in regulation, twice in the playoff against Sergio Garcia and Kevin Kisner.

He’s ranked 70th in the world. He has not yet qualified for next month’s Masters, which led six-time major champion and CBS analyst Nick Faldo to take a shot at him on Twitter, suggesting perhaps Fowler cared more about his endorsements than his game.

Good news is if he misses the Masters he can shoot another six commercials that week! 😳 https://t.co/kgGcmaZUJO

Ok sports fans out of my own curiosity what would you rather have, a boatload of cash or your name in three green books? pic.twitter.com/fHMn1S1y8D

A few days later, Faldo tried to walk back his criticism.

“I’m a Brit, we only roast the ones we like,” Faldo said in a video he posted on Twitter. “Let me just say, I am a Rickie fan — always have been, always will be. Like everybody, we want him to find his game as soon as possible,” Faldo said “So, five years ago now, he was voted by the players as the most overrated player on Tour. It motivated him to go and win The Players literally the next week. So, a couple years later when things were gone quiet, I said to Rickie, ‘Hey, I need to give you a bit of needle, mate, to motivate you.’ And he said to me, ‘Bring it on.’ OK, it’s years later, so hopefully he still remembers that. My comment was probably born a little bit out of jealousy; I’d love to have a few more commercials. … I wish Rickie well. I want him to play great.”

This wasn’t the first time Fowler’s portfolio and visibility has become part of the conversation.

The common joke that follows him is that Fowler has more endorsements than victories. He has deals with Cobra/Puma, Farmers Insurance, Grant Thornton, TaylorMade, Rocket Mortgage and Mercedes. He spends 25-30 days a year with corporate clients.

The commotion caused by Faldo wasn’t the only time Fowler got burned last week. Despite being one of the most popular players on Tour, he wasn’t asked to be part of last week’s pro-am at the Arnold Palmer Invitational.

And then this happened as he was introduced on the first tee before Thursday’s first round.

If being called “Rickie Flower” wasn’t bad enough, there was the golf. Fowler shot 76-77 on the weekend to finish last among players who made the cut at the Arnold Palmer.

“It’s definitely been a grind,” said Fowler, who has missed the cut in 10 of his past 24 starts. “I think more so it’s just a mental challenge because playing and competing against the best players in the world for a decent amount of time now and being up there at one point in the top-10 for quite some time and being one of the top guys in the world, it’s just hard because you know what you’re capable of and where you should be or what you expect out of yourself.

“So that’s been more of the struggle is not beating myself up too much and kind of taking a step back, letting everything happen, but be patient. But yeah, it’s been frustrating at times, been a grind.”

Nearly every statistical category has suffered over the past year. His usually reliable putting prowess left him amid swing changes he remains committed to. His best finish in more than a year came in January 2020, when he tied for 10th at the American Express Championship.

“We’re all on his side,” his caddie, Joe Skovron, said when asked if there was any friction between the two. “We want it just as bad for him as he does. Any caddie-player relationship, you have ups and downs. People forget you’re still playing a sport, right? There’s still going to be emotions that get involved. You’re going to have your moments where it’s not all perfect. Things are going wrong. You’re trying to get through that whole thing together. My job is to support him. We’ve had such a good run. It’s just a part of golf.”

When Harmon decided to back off on travel, Fowler worked more with his son, Claude Harmon III, before eventually deciding to go with John Tillery last year. Their goal was to help make the swing more efficient and repeatable.

The results were solid if not spectacular early on, but Fowler admitted he stalled during the coronavirus pandemic when the PGA Tour went on a 13-week shutdown.

“Now, if we look back on this in a couple of years and I’ve gone on to win a handful of tournaments and I’m in a good spoke, was it worth it?” he said. “Yeah. We all go through changes to ultimately come out in a better spot than we were before. So that’s why we’re going through this and battling through it. That’s where we’re at right now, just trying to play through it, grind it out.”

To see there is hope, Fowler can look to one of his friends. Jordan Spieth went through a long slump — he hasn’t won in more than three years – but over the past month has recorded four consecutive top 15s, including three top 5s.

“There’s certainly been some similarities,” Spieth said. “For him, and I think for me too, the most difficult thing about struggling is when you’ve had a lot of success and it’s then almost impossible to struggle in silence, in darkness, and get your work done in the dark. There’s just going to be so much noise around and so much emphasis on results versus the true understanding of what your end goal is and how much time that can take in golf.”

“We saw a nonhuman in Tiger Woods be able to make massive changes quicker than what is probably realistic for just about anybody else,” Spieth said. “I think that can sometimes hurt the quickness of jumping to conclusions. Struggling publicly like Rickie, it makes it hard. So blocking out the noise is so important and sticking to what you’re doing is so important — and having a team around you that can tell you that.”

At Bay Hill, it was another struggle for Fowler. He birdied three of his last four holes to shoot 70 and make the cut. Then came the issues on the weekend.

Now, he comes back to TPC Sawgrass, the site of his most notable win, trying to regain form. He has to get into the top 50 in the next three weeks to earn a spot in the Masters field. If he continues to slip, Fowler will put the U.S. Open in peril, too.

“It’s very frustrating,” Fowler said. “It’s made it tough at times between Joe and I on the course. We have a great relationship, we have known each other for a long time, but when I’m out there and I’m not hitting shots that I’m visualizing and seeing, it’s hard.”

It doesn’t just stop at the course.

“It’s tough for all of us that are involved, from my caddie, to my wife (Allison),” he said. “She’s having to deal with me at home. I’m trying to be the best husband that I can, not bringing golf back home. But when you’re out on the road that long and on the grind, putting in the work at home — it’s pretty much been all golf. A lot of people have asked ‘Have you been able to fish much at home?’ Not really. It’s been workout, therapy and golf.

“We’re all in this together and we’re going to keep battling it out. It’s been frustrating, I’m ready to be past that.”