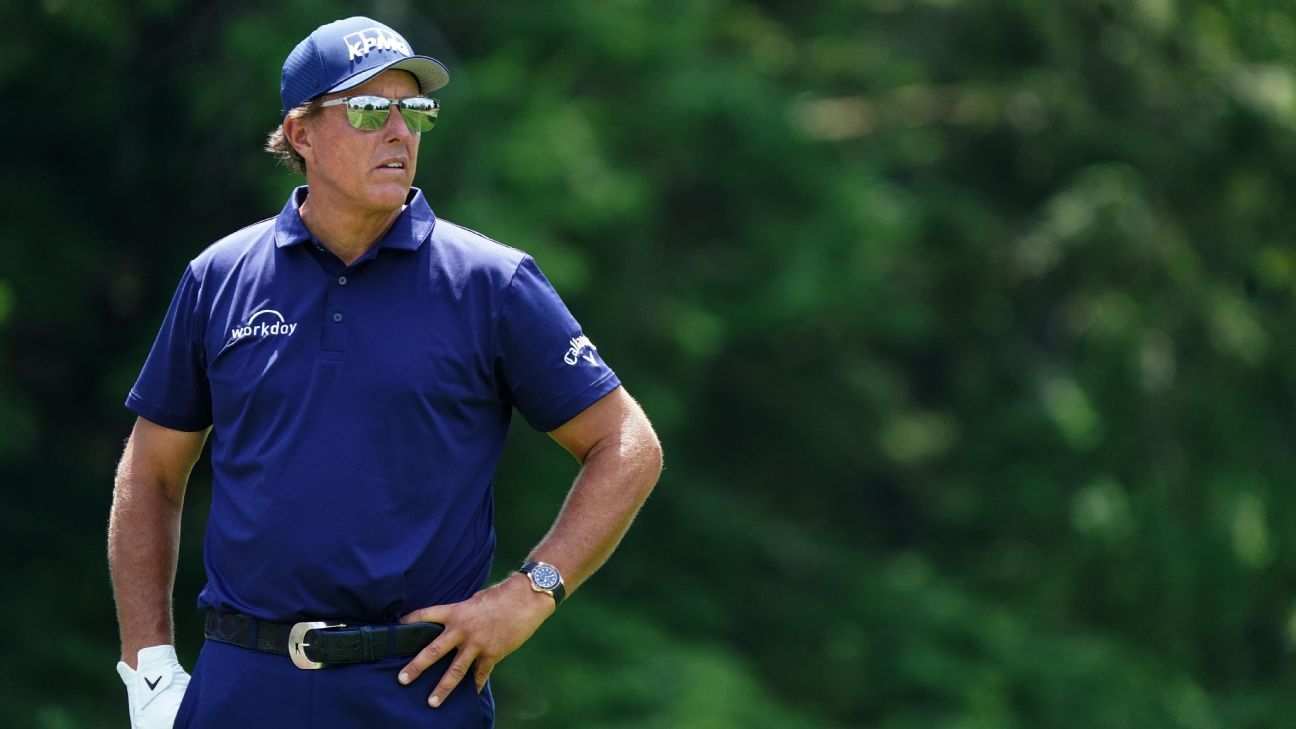 A significant anniversary in Phil Mickelson‘s career passed the other day, one that highlights his early greatness while also reminding us of his longevity.

It has been 30 years since Mickelson won his first PGA Tour event, doing so as a 20-year-old amateur while playing college golf at Arizona State.

The feat occurred so long ago that the PGA Tour had yet to open its season with a two-tournament Hawaii swing. And it happened at a tournament that long ago went away.

Mickelson won the Northern Telecom Open in Tucson, Arizona, overcoming a triple-bogey 8 on the back nine and winning with an 8-foot birdie putt on the final hole to defeat Tom Purtzer and Bob Tway. The date was January 13, 1991 and it was the second tournament of the season.

He remains the last amateur to win on the PGA Tour.

And now, he embarks on another season, at age 50, looking to become the oldest winner of a major championship, and perhaps more realistically, just the eighth player aged 50 or older to win a PGA Tour event.

Mickelson is the host of this week’s American Express Championship in LaQuinta, California, a role he took on last year after serving as the event’s ambassador for three years.

When Mickelson won in 1991, he opened the tournament with scores of 65-71-65 to take a two-shot lead into the final round. At the time, he was already widely acclaimed, having won two NCAA individual titles as well as the 19990 U.S. Amateur. He also played in his first major championship in 1990, tying for 29th at the U.S. Open, where he was the low amateur.

The third round was notable for a shot that personifies Phil. He had an approach that barely trickled into the front portion of a bunker, leaving a very difficult chance to get the ball close to the hole and save par. The safe play was to hit the shot out to the side; getting behind the ball and hitting it toward the pin was nearly impossible.

Instead, Mickelson decided to play a shot that he had practiced numerous times but was audacious under the circumstances. He aimed away from the hole, back down on the fairway. And with the ball on a slight upslope, he hit a shot that went over his head, backwards, and toward the hole. It stopped close enough for a tap-in par.

“I just want his parents to make sure he stays in school two more years,” Purtzer said afterward.

Victory did not come easy. Mickelson went from leading to trailing by two shots after making a triple-bogey 8 on the par-5 14th hole. He twice had hit shots into unplayable lies. Only four holes remained.

But he parred the next hole, birdied the 16th, then parred the 17th and found himself tied with Purtzer and Tway. Both players had made mistakes of their own to let Phil back into the tournament.

Purtzer and Tway shared first and second-place money because Mickelson could not take the $180,000 prize as an amateur. (They each received $144,000.)

“He didn’t give up, he didn’t change anything,” said Mickelson’s father, Phil Sr. “Somebody came back a little bit and all of a sudden he was tied for the lead and birdied the final hole to win. After almost giving it away on the par-5, and then to come back, I thought that was so meaningful of an event that he could carry that with him for a long, long time. If you have a bad hole, it doesn’t mean you are out of it.”

That is a mantra that has followed Mickelson throughout his career.

Now he embarks on a new phase. This week’s tournament looks to be the first of at least four in a row. After this, it’s off to the Farmers Insurance Open, the Saudi International on the European Tour (where he tied for third last year) and then an expected return to California for the AT&T Pebble Beach National Pro-Am. Last year, he added the Genesis Invitational to make it five straight weeks.

There is also the possibility for some senior golf for Mickelson. In 2020, Mickelson won his only two starts on the PGA Tour Champions.

And ranked 67th in the world, Mickelson has some work to do in order to play in the upcoming World Golf Championship events (the relocated Mexico event for the top 50 and the Match Play for the top 64), with a longer-term goal of qualifying for the U.S. Open to be played in his hometown of San Diego at Torrey Pines.

Mickelson will need to be among the top 60 in order play in the U.S. Open — the same event where he made his professional debut — in 1992. At that point, he was already an exempt player on the PGA Tour, by virtue of that victory as an amateur — a status he’s maintained for 30 years and counting.

Bryson DeChambeau wasn’t feeling well during the Masters in November, bad enough to wonder if perhaps he had COVID-19. Following the second round, he took a test that came back negative, finished the tournament but never got into contention, ending in a tie for 34th.

DeChambeau is feeling better now — he tied for seventh at the Sentry Tournament of Champions — but explained recently just what was going on at Augusta National.

And he went to elaborate lengths to determine the issues.

“I actually went to multiple doctors, multiple people, trying to figure out what this was,” DeChambeau said last week during a conference call to promote the Saudi International tournament he will play next week on the European Tour. “I got a couple MRIs. Went to an inner-ear doctor, eye tests, eye pressure, ear pressure, even did an ultrasound on my heart, ultrasounds on my neck to see the blood flow and how things were moving through the different areas of my body, and everything came back really, really well.”

DeChambeau went onto say that he’s been doing brain training with Neuropeak and “the front lobe of my brain was working really, really hard and that’s kind of what gave me some weird symptoms, like crazy overworking.

“So as I started to relax my brain a little bit and just get into a more comfortable situation and got on a really good sleep schedule routine, a lot of those symptoms went away. And they come back every once in a while but as I do a lot of breathing, it goes away and that’s really what I’m focused on trying to do. I’m really working on gut health right now. I think there could be something there.

“We’ve registered some pretty good inflammation in the stomach just form the massive changes I’ve made this past year. When you’re trying to change anything, you’re always going to have something on the back end happen that may or may not be good for you.”

DeChambeau, who is ranked seventh in the world, has completely transformed his body over the past 15 months through a workout and weight-gaining program that has seen him add some 40 pounds. He increased his driving distance average by some 20 years and led the PGA Tour with an average tee shot of 322 yards in 2019-20.

The decision to move the WGC-Mexico Championship to Florida — and call it something else — is another example of just how difficult it is for the PGA Tour to navigate through the pandemic. And a reminder of how hard it is to operate when local events have seen their revenue streams cut to virtually nothing.

Only two other events since the return of golf did not take place — the John Deere Classic and the HSBC-Champions in China. The Deere was replaced on the schedule by the Workday Charity Open and played at Muirfield Village the week before the Memorial on the same course. It was some shrewd maneuvering by the Tour to find another sponsor and not lose playing opportunities.

Now it is faced with a similar scenario, as no replacement sponsor has been announced for the tournament that has been moved to Bradenton, Florida. The John Deere tournament determined it would be financial disaster to try and play without spectators. So, too, apparently did Grupo Salinas, a conglomerate of Mexican companies that puts up some $17 million a year to stage a tournament where it would not have been allowed to have spectators or provide any corporate hospitality.

Grupo Salinas basically didn’t want to pay the full amount; that led to an impasse with the Tour, which has a contract to play these events. Had there been an equitable resolution, Mexico Championship would be on the name of the tournament moving to Florida — just as CJ Cup went to Las Vegas and Zozo went to Thousand Oaks, California last fall.

It will be interesting to see if the WGC event actually does return to Mexico City next year. That appears far from a done deal.

The European Tour resumes its schedule with the first tournament of 2021 at the Abu Dhabi HSBC Championship, one of three Middle East events. Rory McIlroy is playing for the first time since the Masters. McIlroy has not started in the Middle East since he tied for third in Abu Dhabi and was second in Dubai in 2018 … Chris Kirk was playing the Sony Open on the last start of a medical extension he received after taking extensive time off to deal with alcoholism and depression. In order to retain his playing card for the rest of 2021, Kirk needed a two-way tie for third place or better. Kirk finished tied for second — and said afterward he was not aware of what he needed. “I wasn’t looking. I was just going and playing,” he said. “I’m so thankful for the support of my family through these last few years.” … Joaquin Neimman, who missed the Masters due to COVID-19, is off to a hot start in 2021. He was 45 under in two tournaments in Hawaii, losing in a playoff at the Sentry and then finished tied for second at the Sony.

Today at The Open | Final Practice
Inside the day golf stood still at The Players | Live from The Players | Golf Channel
Why You Slice – Easy Release Fix! | WINTER PROJECT (Ep. 6)
Our favorite Golf Digest podcasts of 2022
I CAN’T BELIVE I ENDED UP GIVING A GOLF LESSON DURING A BATTLE GOLF MATCH…PART 2
Ads by Amazon
Ads by Amazon