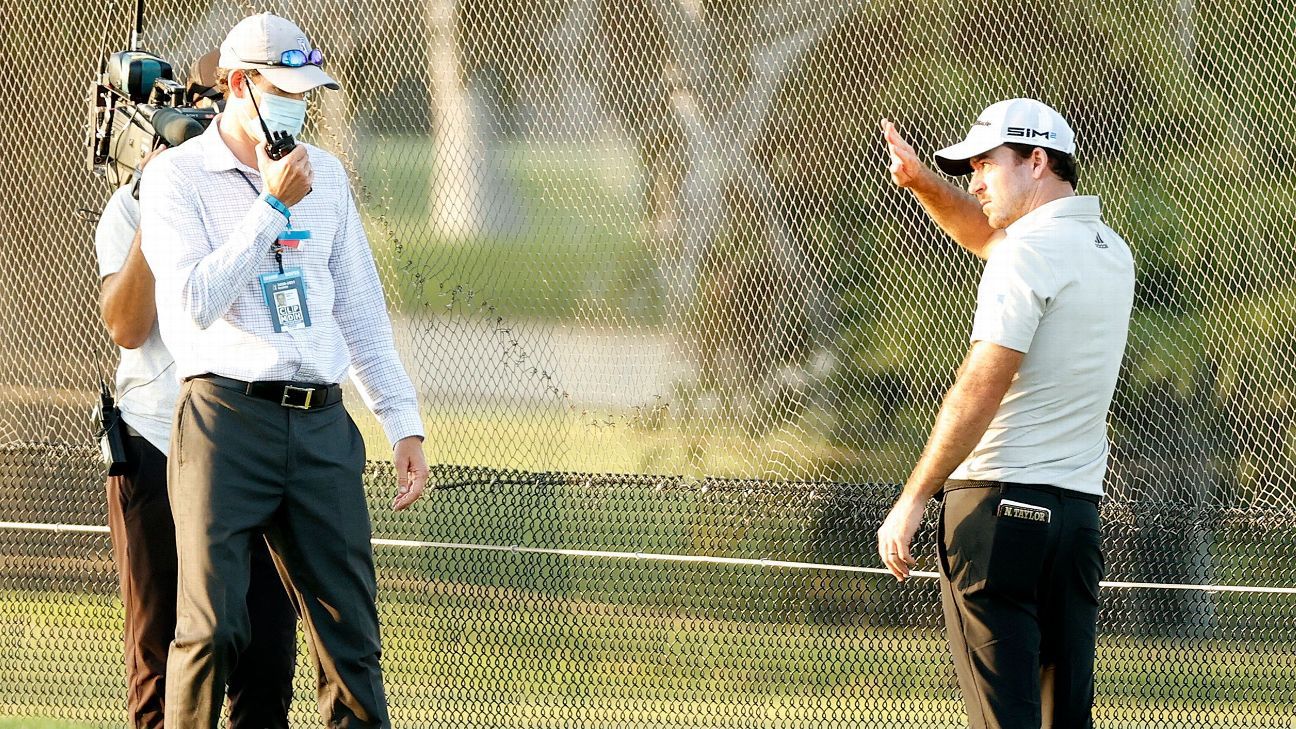 HONOLULU — Nick Taylor pitched in for eagle to get his round headed in the right direction, and he kept going until he finished with a good break and one last birdie for an 8-under 62 and a two-shot lead Friday in the Sony Open.

It’s still as crowded as the H-1 at the top, typical of this tournament.

Taylor gave himself at least some separation with a gap wedge to 6 feet for birdie on No. 8, and then even his worst swing of the day turned into a birdie on the par-5 ninth.

The Canadian hooked his tee shot toward the high netting of the driving range. The ball was so close to the knee-high boundary fence that his only hope was to play the shot left-handed. However, the netting that extends upward from the fence is considered a temporary immovable obstructure. Taylor was given a free drop.

He hit iron to about 50 yards short of the green leaving a good angle, and he clipped a wedge to 2 feet.

“It was a fortunate break,” Taylor said. “Easily could have probably gone under the fence, but to bounce off and get a drop was a break and it was nice to take advantage of it.”

Five players were two shots behind, a group that was decidedly Southern for the second leg of this Hawaii swing — Stewart Cink (63), Webb Simpson (65), Russell Henley (64), Vaughn Taylor (66) and Chris Kirk (65).

It doesn’t stop there. Fourteen players were separated by three shots going into the weekend.

Attribute that to an ideal day of a blue sky and only a light, tropical breeze on a dry course at Waialae. Taylor played in a group with Keith Mitchell, who also shot a 62. Their better-ball score was 55, with only four holes where neither of them made a birdie.

Mitchell also was right around the cut line. Birdies started dropping, and now he’s right in the mix.

Ditto for Harris English, who had at least a share of the lead after every round in his playoff victory last week at Kapalua. He opened with a 70 and was in danger of missing the cut. He shot 64 and was six back.

“I think it’s probably harder out here to make double (bogey) and there’s a lot of birdie opportunities,” Taylor said. “You can make four, five, six pars in a row and you’re probably getting lapped, especially with how the fairways are running.”

Taylor wasn’t even doing that. He was 1 over through 5 holes, slipping behind the cut line. But instead of worrying about the cut, he just kept playing and putting, along with that chip-in for eagle on the 18th.

Waialae has never looked so empty without fans, and Taylor wasn’t sure how to react except to eventually high-five his caddie. Sergio Garcia had a moment like that. He holed a flop shot from right of the sixth green and simply stood there. No one was sure where it went until a caddie reached into the cup and tossed the ball to him.

But it’s plenty crowded on the scoreboard, and the weekend figures to be as wild as ever.

Cink already won the season-opener in the Safeway Open in September, his first victory since the 2009 British Open at Turnberry. He and his wife, a cancer survivor, recovered from COVID-19. His 23-year-old took a leave from Delta Airlines to caddie for him. It doesn’t take much to make the 47-year-old smile.

And then he played golf beneath a gorgeous blue sky in a light, tropical breeze with gentle surf along the edge of Waialae.

“Today was a dream day for playing here at Waialae,” he said. “It was almost no wind. There was a little bit of moisture on the ground from last night, and it was a day where you could really dial it in. You could really hit your spots instead of having to do the usual, which is figure out how wind is going to help or hurt the ball.”

The group three shots behind included Kapalua runner-up Joaquin Niemann of Chile, Collin Morikawa and Hideki Matsuyama, who shot 28 on his second nine for a 65.

The weather was so good that Simpson was nervous. He was 1 under for his round in conditions where he felt the good scores would be in the 62 range. And then he made a 25-foot birdie putt on the par-3 fourth, closed with three straight birdies and felt a lot better.

“It’s one of those days where calm winds, you feel like you need to go shoot 7, 8, 9 under, and I was a couple under for a while there,” he said. “Really happy with my finish and I thought if I can get it to double digits, I would be at least close to the lead going into Saturday.”