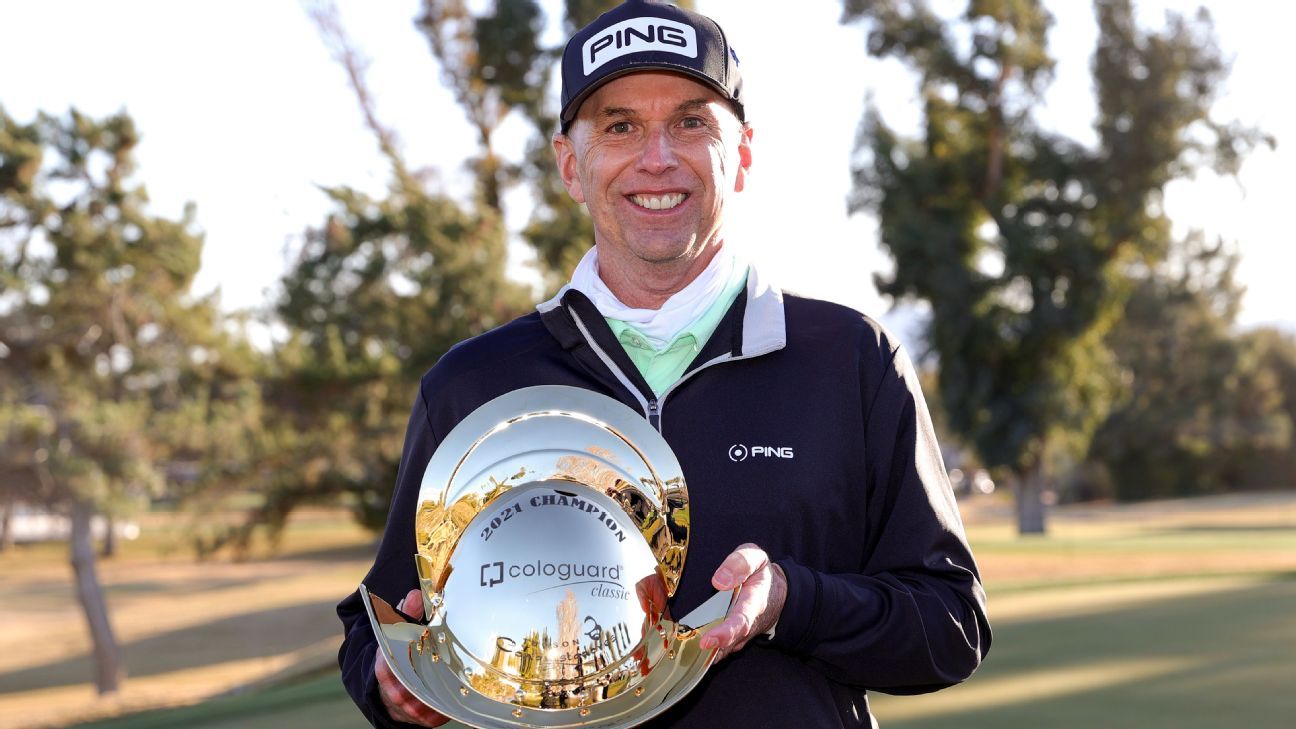 TUCSON, Ariz. — Kevin Sutherland was not really hitting it well, not making a whole lot putts, yet kept hanging around.

A chip-in birdie on Tucson National’s 16th hole changed everything.

The only birdie of the final round on the par-3 not only put Sutherland in a tie for the lead, it gave him the confidence to close out his fifth PGA Tour Champions title.

Stuck in neutral most of a windy afternoon, Sutherland chipped in for birdie at No. 16 and had a tap-in for another on the next hole, shooting a 4-under 69 to overtake Mike Weir in the Colorguard Classic on Sunday.

“I was two down with three to play, wasn’t really showing a lot, not really doing anything at that point and all of a sudden chip it in,” Sutherland said. “All of a sudden, we’re tied and I played last two holes as well as I played any holes all week.”

Sutherland trailed by two to start the day and was down four after Weir birdied the par-5 eighth. Sutherland cut the lead in half with two birdies in his first three holes to start on the back nine and chipped in from short right of the 183-yard, par-3 16th.

Sutherland tapped in on 17 after putting through the fringe on the par 5 to take the lead and just missed another birdie on the difficult 18th to close out his second victory in his past three PGA Tour Champions starts. He finished at 15 under, two ahead of Weir and three up on Steve Stricker and Scott Parel.

“Arizona has always been good to me,” said Sutherland, who won the Charles Schwab Championship in Phoenix last year. “I don’t know what it is about the air here.”

Phil Mickelson‘s long shot bid to win his first three PGA Tour Champions starts came to a screeching halt with a triple bogey on the par-4 ninth. He shot 73 to finish 11 shots back.

Weir was in control for most of the front nine, then watched one putt after another slide past the hole on the back. The 2003 Masters champion had bogeys on two of his final three holes to shoot an even-par 73 for his second runner-up finish on the PGA Tour Champions since turning 50 last year.

Weir opened the second round with a birdie as gusting wind bent flagsticks at sharp angles. Following five straight pars, he walked up to the green at the par-3 seventh as Rush’s “Limelight” blared from one of the backyards lining Tucson National.

The Canadian left-hander responded with a little inspiration of his own, chipping in for birdie from about 90 feet. A curling 15-foot birdie putt at the par-5 eighth gave him a four-shot lead over Sutherland.

Sutherland opened the back nine with a birdie and had another on the par-5 12th. The 56-year-old from Sacramento, California, stumbled when he couldn’t get up and down from a bunker on the par-3 14th, but he closed with a flourish as conditions worsened.

Weir watched a slick, 4-foot par putt slide by the hole after a nice bunker shot on No. 16 and missed a birdie putt from the fringe on No. 17 after a bunker shot ran through the back of the green. He three-putted to bogey the par-14 18th.

“A couple little things, that’s all it is,” Weir said. “You get a little break here and there and that wins a tournament.”

Mickelson was the last amateur to win on the PGA Tour in Tucson 30 years ago, but he couldn’t conjure up the same magic in his return.

Nine shots back entering the final round, he had three birdies and a bogey through the first eight holes, before hitting his tee shot into the water on the par-4 ninth. He then hit into the greenside bunker and three-putted for a 7.

Mickelson did avoid the mud on No. 15, at least.

He hit two good tee shots in the opening two rounds and both found the pond on the dogleg of the par 5. Mickelson made a birdie after hitting his second shot out of the mud in the first round and salved par after another mud shot in the second.

He stayed away from the pond altogether on Sunday by hitting into the adjacent 17th fairway and ended up with par after missing a birdie putt of about 15 feet.

“This is the kind of stuff that I’ve been doing,” he said. “I hit a decent chip, but I left it above the hole, missed the putt and made a five.”