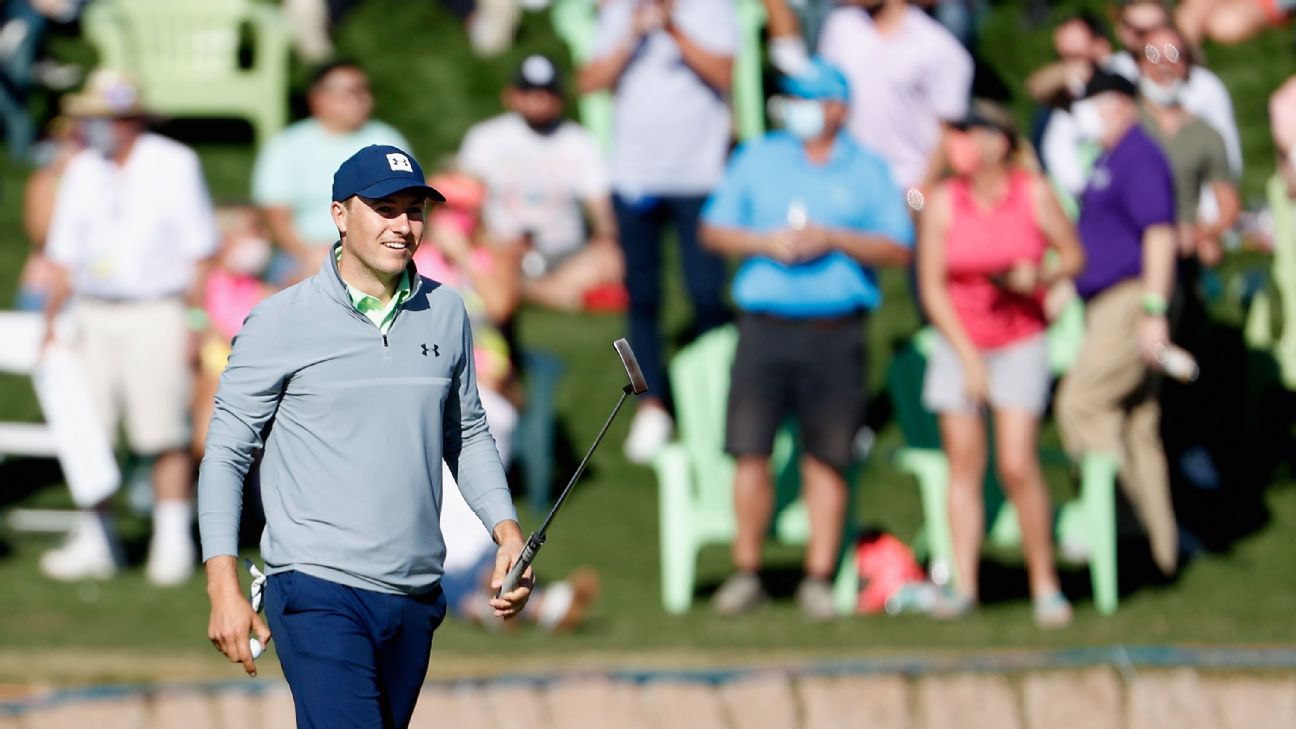 SCOTTSDALE, Ariz. — A day after saying he needed to be patient about results, Jordan Spieth matched his career best with a 10-under 61 on Saturday for a share of the third-round lead with Xander Schauffele in the Waste Management Phoenix Open.

Winless since the 2017 British Open, Spieth is trying recapture the form that carried him to 11 PGA Tour victories – three of them majors – in his first five seasons on the tour.

The 27-year-old Texan raised the volume considerably at TPC Scottsdale, drawing the biggest roar of the week from the limited crowd on the par-3 16th when he curled in a 36-footer for birdie and the outright lead.

He followed with a fan-thrilling 30-footer for birdie on 17 after driving well left on the short par 4.

Instead of the usual Saturday crowd that has topped 200,000, attendance is capped at 5,000 fans a day, the most for a tour event during the COVID-19 pandemic.

Spieth gave them a show to remember.

After making four birdies on the front nine for a share of the lead, he had an unexpected birdie on the par-4 10th when he chipped in from 68 feet after driving left and hitting his approach long and left.

Spieth hit inside a foot from 170 yards for birdie on the par-4 11th, then just missed eagling the two back-nine par 5s. On the 13th, he couldn’t get a 5 1/2-foot eagle putt to fall after hitting a 208-yard second shot from the desert hardpan. On the water-guarded 15th, he left a 24-foot eagle putt 6 inches short.

Spieth had a career-best 10 birdies and matched his tour best of 61 set in the third round of his 2015 victory in the John Deere Classic.

The fourth-ranked Schauffele, coming off a second-place tie last week at Torrey Pines, shot a 65 to match Spieth at 18-under 196.

Schauffele, the second-round leader, made a 7-foot birdie putt on 17 to tie Spieth, then missed an 11-footer on 18.

Scottie Scheffler and Kyoung-Hoon Lee each shot 66 to get to 14 under.

Third-ranked Justin Thomas, third the last two years in the event, had a 64 to join Louis Oosthuizen (63) at 14 under.

Thomas squandered five strokes on two holes late Thursday and early Friday, making a triple bogey on 17 in the first round and opening the second with a double on 10.

Steve Stricker, the 53-year-old U.S. Ryder Cup captain trying to become the oldest winner in PGA Tour history, had a 69 to drop into a tie for seventh at 13 under with Brooks Koepka (66) and James Hahn (66). Stricker began the day a stroke behind Schauffele after opening rounds of 65 and 66.