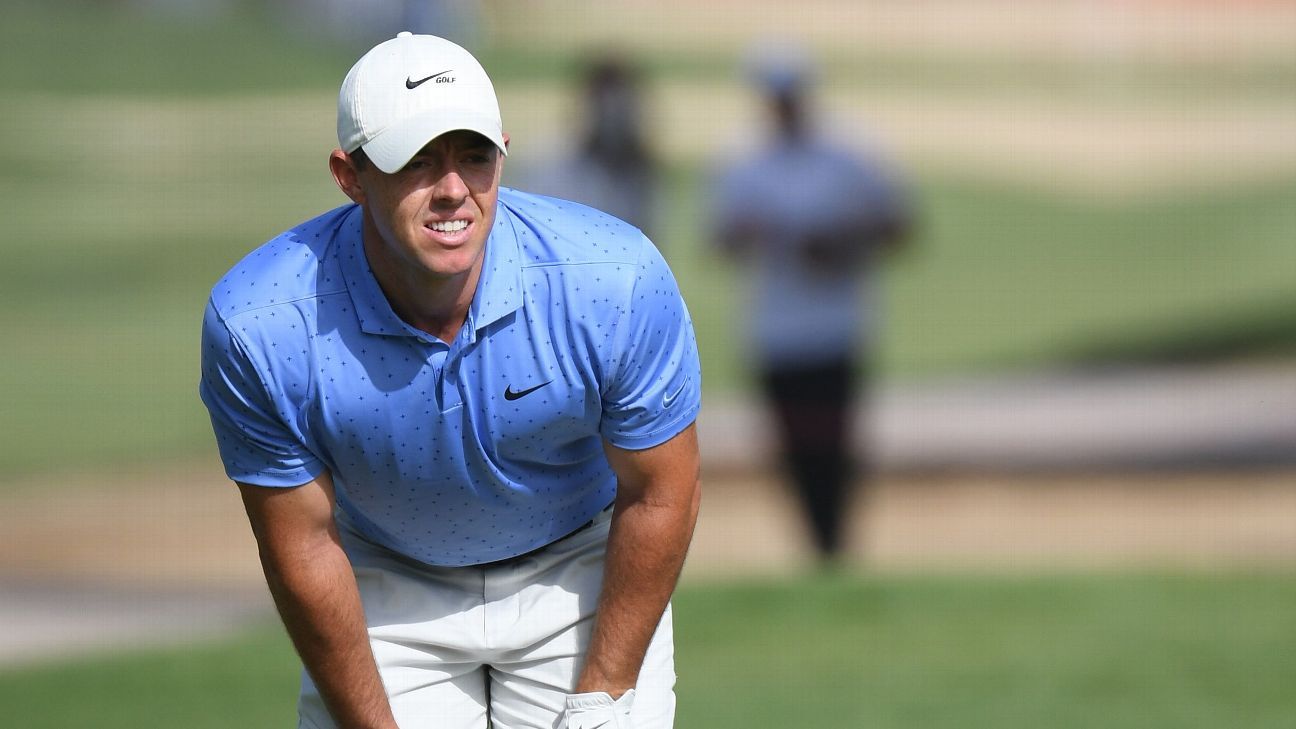 As impressive as Tyrrell Hatton‘s victory was in Abu Dhabi, it was an equally disappointing result for Rory McIlroy at the European Tour’s first event of 2021.

And it has become a recurring theme for McIlroy, who now has gone 15 months without a victory and seemingly struggles to put four good rounds together — especially the last one when he has a chance to win.

McIlroy held a one-shot lead through 54 holes, certainly not a dominant position. But a final-round 72 was never going to get it done on an Abu Dhabi Golf Club course on which McIlroy was one of only three players to finish in the top 15 and not shoot in the 60s over the last 18 holes.

Tied as late as the eighth hole, McIlroy watched as Hatton surged to victory with a final-round 66 that beat him five strokes. Hatton also passed him in the Official World Ranking to a career-best fifth. McIlroy is now seventh. He also sounds like someone searching.

“I thought for the most part of the week, my short game and putting was good,” McIlroy said. “I scrambled well. Had some pretty good approach shots, especially [Saturday] coming down the last few holes. I thought there were parts of rounds where I got the driver going, even the last few holes there.

“But still, sometimes I’ll have a few holes where it’s like that and there’s a few holes where it sort of gets away from me. So a little more consistency and being able to replicate the good ones hole after hole and then day after day until you sort of put four rounds together.”

He noted that he saw his game coming around in the last few tournaments he played in 2020. With that, he didn’t want to take a lengthy break. So he headed to his Florida home and stayed busy. His longtime coach, Michael Bannon, visited him for work just before Christmas. Bannon was with him again in Abu Dhabi. McIlroy came out firing, shooting an opening-round 65.

But it was the second and fourth rounds that doomed him. McIlroy was one of only two players in the top 24 who did not shoot at least three rounds under par.

McIlroy now has four runners-up finishes, as well as four third-place finishes in the Middle East event he has played 11 times without a victory. Many times, it is viewed as a nice start to the year, but given his emphasis on being ready to go, the result was somewhat disheartening for a player who admitted he struggled following the pandemic shutdown.

McIlroy’s only top-10s after the resumption of play were at the Tour Championship — the same week his wife, Erica, had the couple’s first child — and the U.S. Open and the Masters. But he was never a serious contender in any.

It was at the Genesis Invitational last year when McIlroy took over the No. 1 ranking from Brooks Koepka, having tied for fifth after sharing the 54-hole lead. He also had a good chance at the Arnold Palmer Invitational, where he trailed by two but shot a final-round 76 to tie for fifth. Hatton was the winner there, as well.

That was his sixth straight top-5 finish going back to 2019. Things looked great for McIlroy heading to the Masters, a tournament that was soon postponed as the golf world shut down for 13 weeks.

In an interview with tournament sponsor HSBC prior to the start of last week’s event, the 31-year-old, four-time major winner acknowledged that not everything is about birdies and bogeys.

“There’s still a lot more I want to achieve in the game and in my personal goals, but I’d love to look back on me and my career, and be like, ‘He was someone who brought a little bit of joy into our lives.’ I’d be happy with that,” he said.

“Focus on what really matters, and that is, more so than ever, family; the relationships in your life; and your game. All the rest is noise. You’re still going to be the same person whether you win four majors or 10 majors.”

The focus on the fifth major for McIlroy has now been a thing for six years. The last of his four came at the 2014 PGA Championship. It was widely assumed he would have added at least one by now, with the big emphasis on the Masters, where he has a chance to complete the career Grand Slam.

That will undoubtedly be a talking point again for McIlroy as the year’s first major championship at Augusta National looms, now just a little more than two months away.

It would probably help ease some angst if McIlroy could knock off a victory between now and then. He’ll have plenty of opportunities, starting with this week’s Farmers Insurance Open.

Lining up the captains

The choice of Davis Love III as 2022 Presidents Cup captain came as somewhat of a surprise, only in the sense that it appeared the powers-that-be who are now coordinating assistants and captains for both the Presidents Cup and Ryder Cup seemed set on the idea of using the competition as a stepping stone to a Ryder Cup captaincy.

Love has already captained the U.S. Ryder Cup team (2012, 2016), and he was an assistant for Stricker in 2017 and will be again this year at Whistling Straits. Given Love’s experience and that the Presidents Cup is in Love’s home state of North Carolina at Quail Hollow, the move makes some sense.

But there had been speculation that Zach Johnson would get the nod against Trevor Immelman, who last year was named the International captain. Johnson was a U.S. assistant in the 2018 Ryder Cup in Paris for Jim Furyk and for Woods in the 2019 Presidents Cup in Melbourne and is scheduled to assist Stricker this year.

Johnson is part of the overall plan to have assistants and captains work several events for continuity.

It is unclear if the Ryder Cup delay will impact any of this.

The 2023 Ryder Cup in Rome is the next captaincy to be decided for the U.S. Perhaps that is where Johnson lands. It might also be a spot for Phil Mickelson, although Lefty has always seemed destined for Bethpage Black in New York, where the competition will be played in 2025. Mickelson will be 55 then. Might he want to do it earlier? And where does Woods fit in? Then there would also be the 2024 Presidents Cup, scheduled for Royal Montreal, to determine.

Tony Finau led for a time on the front nine Sunday at the American Express Championship. He was seeking his second PGA Tour victory and first since 2016. He shot a final-round 68. That typically might be enough to get it done on the final day, but not at PGA West.

Patrick Cantlay shot 61, and Si Woo Kim shot 64 to win, passing Finau and leaving the 20th-ranked player in the world with his 35th top-10 finish since his only victory.

“When I walk off the 72nd hole, I have a pretty good sense of how long it’s going to sting,” Finau said. “I’m pretty encouraged right now. I’ve been working on some things in my golf swing, and I was able to hit a lot of good shots this week, and so I know I’m heading in the right direction.

“I’ve said before, I feel like I’ve got to get a little better to win again. So, it’s an encouraging week on a lot of levels.”

When Phil Mickelson parred all 18 holes on Friday during the second round of the American Express Championship, it was the first time in 2,201 rounds on the PGA Tour he had a round with all pars. When told of the “feat,” Mickelson, deadpan, said: “Which is surprising because I really try to hit fairways and the center of the greens and just make easy pars and for that to be the first time it’s really shocking.” … McIlroy, subject to change, is set to begin 2021 by playing seven of eight weeks. Following Abu Dhabi and this week’s Farmers, he is scheduled to play the Waste Management Phoenix Open before a week off, then the Genesis Invitational, the WGC-Mexico event moved to Florida, the Arnold Palmer Invitational and the Players Championship.