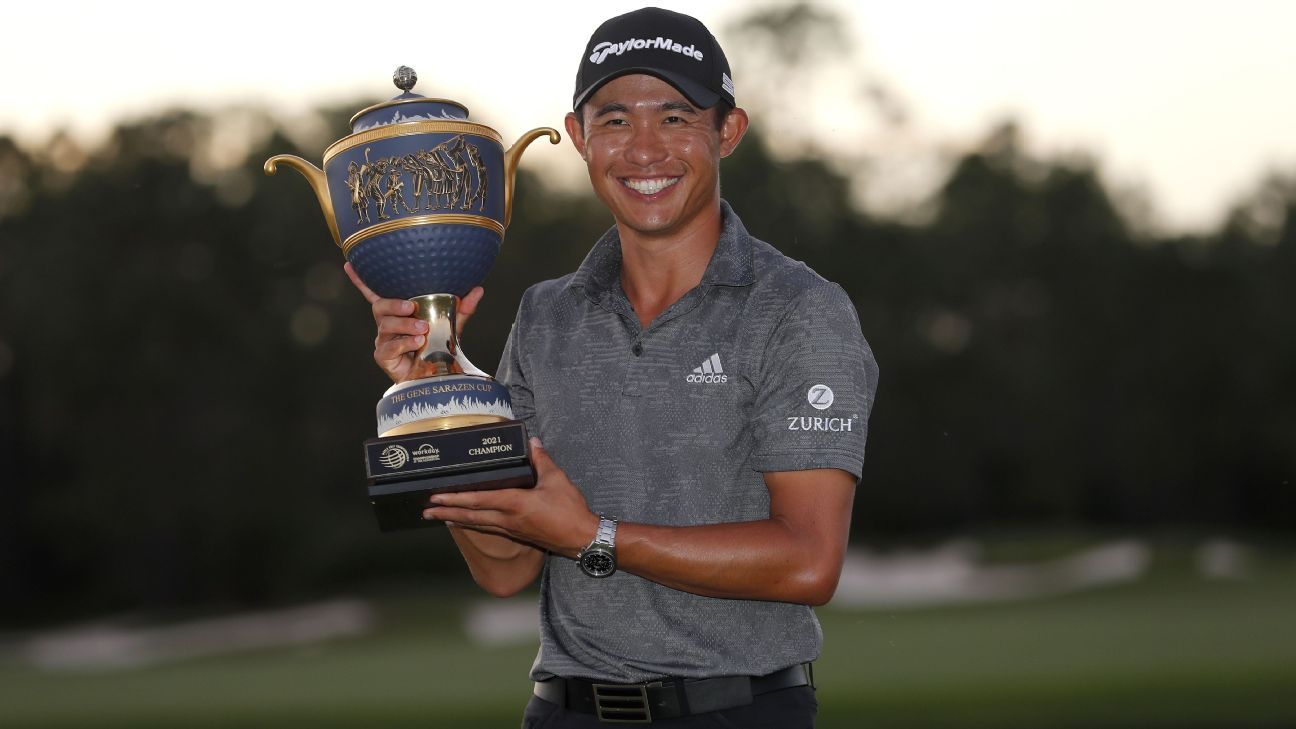 BRADENTON, Fla. — PGA champion Collin Morikawa shook off an early mistake and played a steady hand on a Concession golf course known for calamity, closing with a 3-under 69 for a three-shot victory in the Workday Championship.

Morikawa picked up a few short-game tips from major champions – Mark O’Meara on his putting, Concession member Paul Azinger on the chipping — and he says it carried him to another big win.

And there was a tribute to Tiger Woods, his golf idol growing up.

“We don’t say ‘Thank you’ enough,” Morikawa said, referring to how much Woods has raised the profile and prize money in golf. He also mentioned his grandfather dying a month ago and began to get emotional.

He finished at 18-under 270 and became the 24th player to win a major and a World Golf Championship title since this series began in 1999. He joined Woods as the only players to win both before turning 25.

There were red numbers on the board and on the golf course, with several players wearing red shirts and black pants – the Sunday colors of Woods – as a show of support as Woods recovers from career-threatening leg injuries from his car crash in Los Angeles last Tuesday.

“Red and black, we know that’s what Tiger does on Sundays, so just to join in and just let Tiger know we’re supporting him in the best way we can,” Tony Finau said. “We’re still playing and we miss him out here, but it was cool just to be a part of that.”

Morikawa didn’t have the colors, but he had the game.

So many times on Sunday, Woods had the lead and forced everyone to catch him. Outside of a chunked chip on the second hole that made him scramble for bogey, Morikawa didn’t miss a fairway the rest of the way and was rarely out of position.

Horschel caught Morikawa after three holes and tried to stay with him. Koepka had the last good chance to catch him until he three-putted for par from 35 feet on the par-5 17th hole.

Hovland, who finished his second round with a quadruple bogey, might have had the best chance of all. Hovland someone managed to punch out of the wire grass and onto the green to make birdie on the par-5 13th, his seventh birdie of the round that pulled him with one shot.

His hopes effectively ended on the next hole.

Just as Morikawa was pouring in an 8-foot birdie putt on the short par-4 12th hole, Hovland ran his 40-foot birdie putt some 15 feet past the hole on the par-3 14th, and missed the par putt.

Morikawa’s lead was back to three shots, and he never flinched the rest of the day.

Scottie Scheffler also was in the mix with six birdies in 12 holes. He followed a bogey from the bunker on the 14th with another birdie to stay close, only to hit his tee shot into the water on the 16th hole to make double bogey. Scheffler still shot a 68 and finished alone in fifth.

Rory McIlroy and Patrick Reed, both dressed in red and black, never got anything going. McIlroy closed with a 71 to tie for sixth, while Reed shot a 72 and to finish another spot back.

“I think just for everyone to show their appreciation for what he means to us out here,” McIlroy said of the tribute. “If there was no Tiger Woods, I just the think the tour and the game of golf in general would be in a worse place. He’s meant a lot to us, he still does mean a lot to us and I think that was just a little way to show that.”

Reed won this WGC last year in Mexico City. It was moved for this year to Concession because of COVID-19 circumstances.