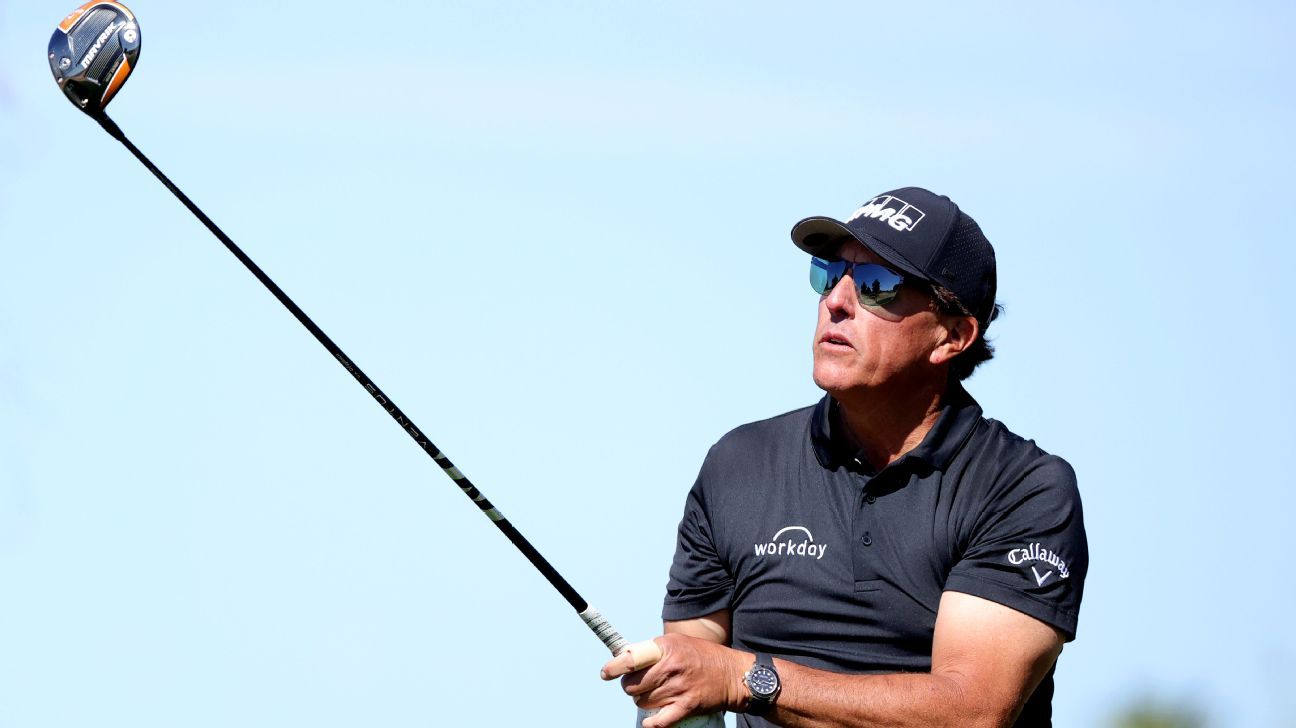 TUCSON, Ariz. — Phil Mickelson waded into the mud after his tee shot on Tucson National’s 15th hole trickled into a pond. He adjusted his feet for balance and punched a 9-iron down the fairway, earning applause from playing partner Fred Couples.

Another 9-iron on the par 5 to 4 feet and, after wiping off his shoes, an improbable birdie.

A bit of Mickelson magic has Lefty in the hunt to make history.

Mickelson’s mud birdie highlighted a 3-under 70 at the Cologuard Classic on Friday, putting him in contention for a third straight victory to open his PGA Tour Champions career.

Mickelson was four shots behind Mike Weir, who had a bogey-free 66 in windy conditions at Tucson National. Scott Verplank holed out from a greenside bunker for birdie on the par-4 ninth to close out a 65.

Mickelson is bidding to become the first player to win his first three starts on a PGA Tour-sanctioned tour.

Lefty had a relatively stress-free front nine, shooting 3 under on one of the courses where he became the last amateur to win on the PGA Tour 30 years earlier. He hit his second shot on the par-5 eighth hole onto the side of the adjacent No. 3 tee, where Jeff Sluman was walking past after teeing off.

“I hit it way over here just to say hi,” Mickelson said, drawing a laugh from Sluman.

Facing a difficult downhill lie in the dormant Bermuda, Mickelson hit the ball to about 6 feet and made the putt for birdie.

The five-time major champion began having trouble on the back nine, starting with a three-putt bogey on the par-4 11th. Mickelson took double bogey after hitting out-of-bounds on the par-4 13th and appeared to be in trouble when his tee shot on No. 15 rolled into a pond at the corner of the dogleg.

The pond was 237 yards from the tee, so Mickelson figured there was no way he could hit a 5-iron that far into the wind. Once the ball trickled into the mud, he went right in after it.

“I’m going to have to have Callaway send me another pair of those shoes because these were new, but they’re not any good anymore,” he said.

Mickelson followed with another birdie on the par-5 17th, carving a 3-iron to the front bunker and nearly holing it. He closed with a par on the difficult par-4 18th to shoot even-par 37 on the back nine.

Mickelson won the Ozarks National in Missouri last August in his first start after turning 50 and followed up with a win at the Country Club of Virginia in October. Though primarily focused on playing on the PGA Tour, he opted to return to Tucson, where he won three times – the first at Tucson National and TPC Starr Pass as 20-year-old amateur at Arizona State.

“I’ve got some work to do to get those short irons close,” Mickelson said. If I can do that, I can make a lot of birdies here, but this was not the day. I did not score very well today. I’ve got to get after it because these guys are making a lot of birdies and I’ve got to try to pass them.”

Weir opened with two birdies and followed with seven straight pars. The 2003 Masters champion and had five birdies in a stretch of seven holes to shoot five-under 32 on the back nine.

“Overall, it was just solid all the way around,” he said. “I made a couple nice putts. When you shoot 7 under, it’s a few close ones, made a few nice ones, played well, too.”

Verplank had a stretch of six birdies in seven holes after starting on the back nine and followed eight straight pars with his holed-out bunker shot.

“I hadn’t hit many bunker shots, but let’s see what happens and I hit a really good shot,” Verplank said. “But they’re lucky when they go in, so I’ll take it.”

Time To CONQUER MY DRIVER | golf driver lesson #LockeysJourney
Tiger and Rory vs. Spieth and JT: What to watch at The Match
I CAN’T BELIVE I ENDED UP GIVING A GOLF LESSON DURING A BATTLE GOLF MATCH…PART 2
GOLF: Why Amateur Golfers Can’t Hit Driver Farther (BACKSWING)
Tim O’Neal slays his Q-School demons and earns Senior PGA Tour card
Ads by Amazon
Ads by Amazon