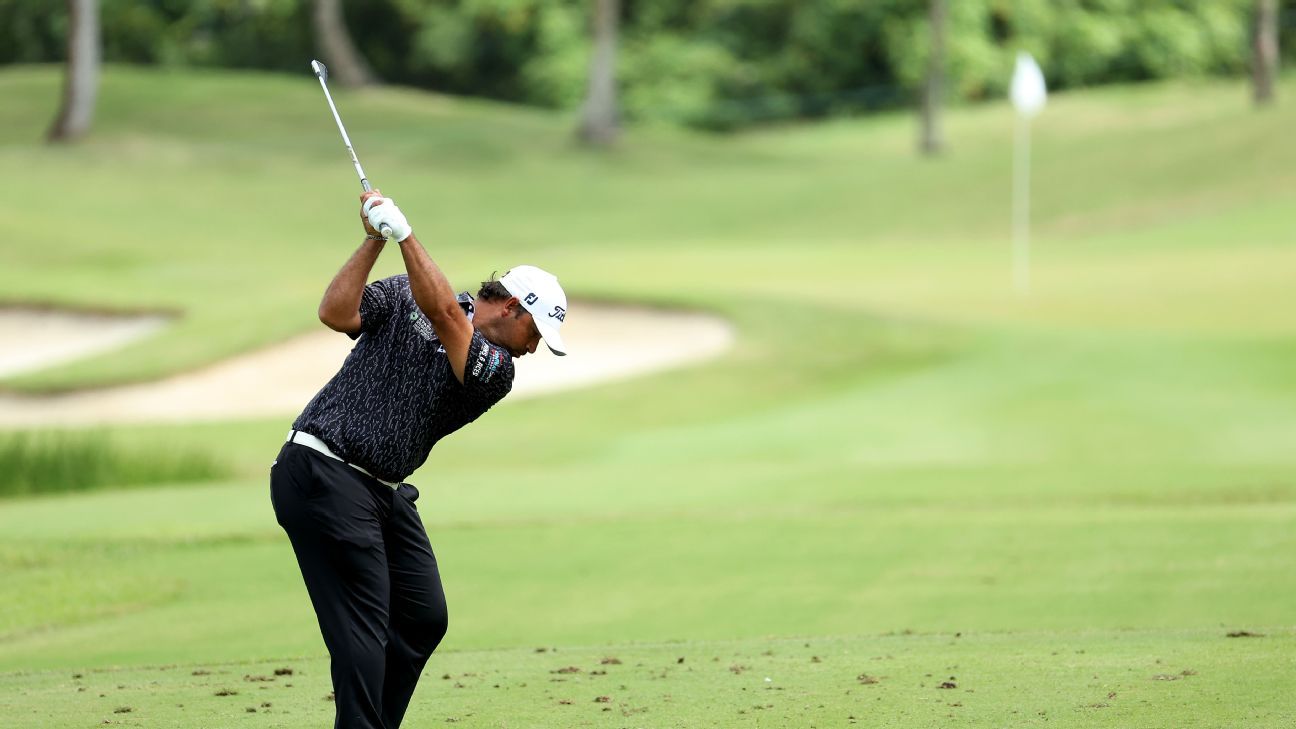 RIO GRANDE, Puerto Rico — Local favorite Rafael Campos took a share of the lead Saturday in the PGA Tour’s Puerto Rico Open, waiting out a series of rain delays to shoot a 5-under 67 at windy Grand Reserve.

“I know there’s a lot of things that can basically change my life tomorrow,” Campos said. “But truth is, I’m just really happy. I have been playing good golf the last two weeks, and I really want to keep that mindset of the work I have been putting in the last four months, I’m starting to see good results.

“I think I will just focus on that, focus on playing the golf course the way I know how to play it, be aggressive when I have to be aggressive, and be conservative when I obviously don’t feel comfortable. So, yeah, I really don’t want to think about tomorrow. I just want to go out and hopefully play some good golf.”

Play was delayed three times for about an hour total in the afternoon because of the short, heavy downpours. With expected heavy rain overnight and into the morning, the final round will feature threesomes off split tees.

Campos has two top-10 finishes in the event, tying for eighth in 2016 and tying for 10th in 2017. After missing the cuts in seven of eight events to start the PGA Tour season, he tied for seventh last week in Florida in a Korn Ferry Tour event. In 2019, he won the Bahamas Great Abaco Classic to become the first Puerto Rican in Korn Ferry Tour history.

The former Virginia Commonwealth player played the front nine in 3 under, with birdies on the par-5 second, par-4 third and par-5 fifth. He also birdied the par-4 10th and 12th.

“I felt today I hit the ball very well, with the exception of the last couple of holes,” Compos said. “But I’m really happy with where I’m standing right now, and I really think can’t be in a better position basically for tomorrow. Hopefully, just kind of keep doing the same thing we’re doing. I really feel comfortable with my swing.”

He won’t get to play in front of many of his fans Sunday because of coronavirus restrictions.

“It feels very weird only seeing them for like three holes out of 18 holes,” Campos said. “So I got my mom, I got my wife, I got family supporting me. So that’s all I really need right now. And, obviously, I feel the great positive energy the fans actually give me, either text messages or out hereon the course.”

The tournament is being played opposite the World Golf Championship event in Florida. The winner will get into the PGA Championship in May but not the Masters in April.

“It’s been a long time since I have been in a situation like this, but I’m not afraid of the moment,” Murray said. “And at the end of the day, you still got to play good golf, no matter – no matter who’s chasing you or who I’m chasing.”

He birdied five of the first nine holes.

“I had the putter rolling and just kind of kept it rolling throughout the round,” Murray said. “We had to stop and start. We were a little unfortunate, but they were quick. And the PGA Tour did a good job of kind of keeping us out there and not bringing us in each time.”

“Had to scramble a little bit harder today,” Wu said. “I think it was playing tougher, the start and the stop, the rain, crazy conditions.”