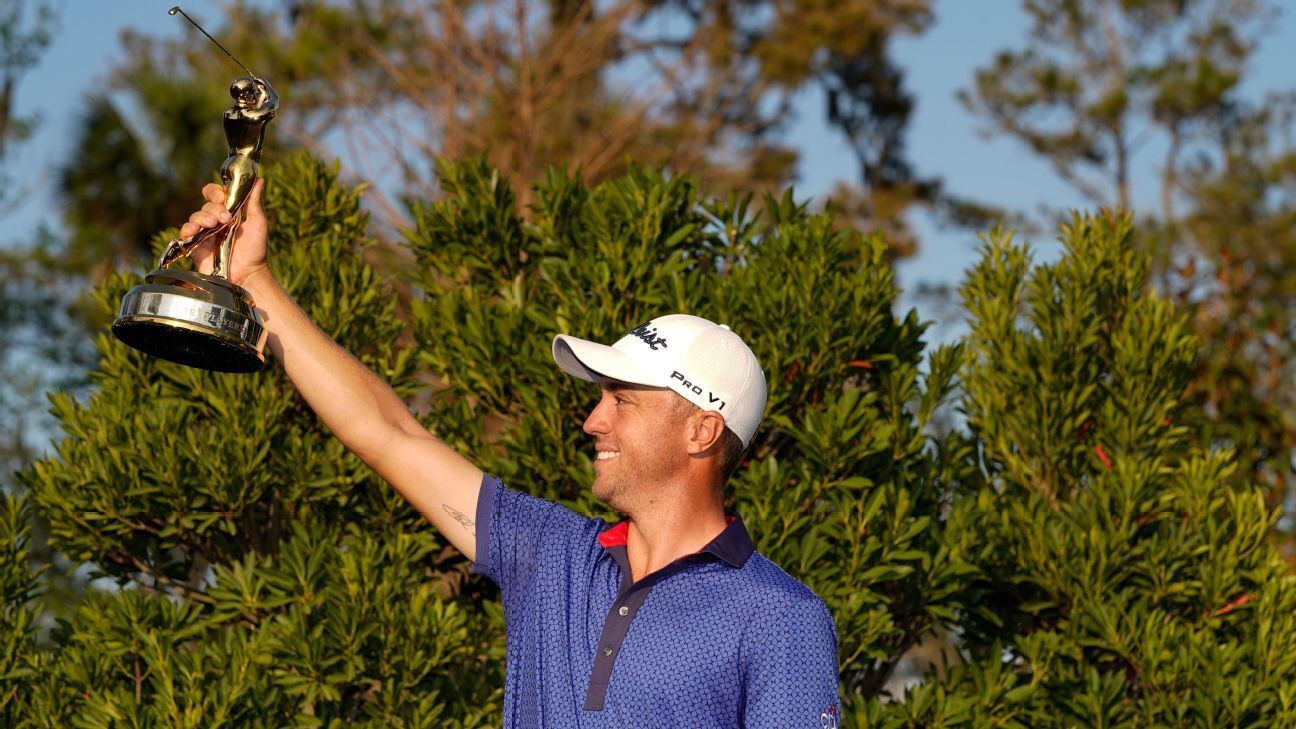 PONTE VEDRA BEACH, Fla. — The ball seemed destined for the water. All the body language in the world didn’t seem like it was going to change that. Justin Thomas tried anyway. And then, a shot aimed too far left somehow found land, rolling along the railroad ties that frame the pond for another 65 yards before coming to rest safely in the 18th fairway.

Thomas pulled his cap over his eyes and staggered toward his caddie, Jimmy Johnson, knowing that calamity had been avoided.

It was more relief than joy. That, too, was the emotion Thomas carried through after the final hole at TPC Sawgrass and into the celebration of a one-shot victory over Lee Westwood at the Players Championship.

For perhaps the first time in his professional life, Thomas, 27, had to deal with adversity this year, some of it self-inflicted. He used a homophobic slur, caught on microphone, in January at the Sentry Tournament of Champions. One of his sponsors, Ralph Lauren, dropped him. His grandfather, Paul Thomas, a former Kentucky club pro, passed away last month. And in February, Tiger Woods, with whom Thomas has become close, was in a serious accident and suffered significant injuries.

“It’s been a crappy couple months,” said Thomas, who shot 64-68 on the weekend to win for the 14th time on the PGA Tour. “I’ve had stuff happen in my life I never thought I’d have happen. Losing grandpa was terrible. Having to play a round of golf (at the Waste Management Phoenix Open after his grandfather died) was terrible — and not playing well. It was a lot. And it took a lot on me mentally.

“If I wanted to come to these tournaments and have a chance to win, then I needed to suck it up and get over it. If I wanted to throw a pity party for myself or feel sorry for myself, there’s no reason to show up. I can stay home until I feel like I’m ready. I felt like I was in a good enough head space where I could play. I just wasn’t playing well. And then once I wasn’t playing well, it was kind of snowballing.”

The first two rounds of this tournament followed a similar pattern. Thomas was outside the cut line through 27 holes. He made four birdies over his final nine holes Friday to get himself into the weekend. That set up a third-round 64 in which he had an eagle, seven birdies and a bogey. Still, he entered Sunday’s final round three strokes behind Westwood.

Through eight holes Sunday, he was 1 over for the round despite hitting every fairway and green. Finally, though, putts started dropping and he played a four-hole stretch beginning at the ninth in 5 under to take the lead.

“It was a ball-striking clinic,” Johnson said.

His father and coach, Mike Thomas, saw something familiar in his son.

“That looked like a round from the old Justin Thomas,” Mike Thomas said. “Just ball-striking the heck out of it. If he had had that putter rocking, he’d have won by six or seven.”

It’s been a tough time for Mike Thomas, too. It was his father who passed away on Feb. 6. He saw the fallout from his son’s use of a homophobic slur. Then came the emotions from Woods’ accident.

Mike Thomas had difficulty finding the words when speaking of his father’s death, several times stopping to compose himself. Paul Thomas had an influence on Justin’s game, too, as “he had a lot of stories,” Mike Thomas said. “Of course, in his later years, we were hearing them for the seventh or eighth times — or 20th time. But Justin always liked to hear them.”

Thomas considered not playing the final round in Phoenix following his grandfather’s death.

“The hardest round of golf I ever played,” Thomas said.

He shot 1-over 72 that Sunday and tied for 13th as Brooks Koepka won the tournament.

“I know Justin considered not playing, but dad would have wanted him to,” Mike Thomas said.

Thomas missed the cut at the Genesis Invitational, just a few days before Woods’ accident. He finished tied for 15th at the WGC-Workday Championship the following week.

“There’s people who have a lot more problems than we do, but it was really his first time dealing with losing a loved one and then there was the backlash from the other stuff,” Mike Thomas said. “He was struggling mentally.”

Thomas did not disclose many details, but he did say he has been in touch with Woods. He said he received encouragement from him — just as Bryson DeChambeau has from Woods, too.

“I was replaying what [Woods] told me a lot in my head,” Thomas said. “He likes to give me a lot of grief, especially when he’s not here … We’re all pulling for him. And I’m so glad to hear everything has been going well with him.

“But part of me wishes he was here so I could rub it in his face a little bit more. But no, I’m happy and I hope he’s happy. I always appreciate his help.”

No doubt Thomas will hear from Woods about that final tee shot. The 5-wood draw started a little too close to the water and somehow avoided it. Thomas said it was “50-50” in the air whether he felt he’d see a splash.

“That’s the kind of stuff that happens when you win tournaments,” Thomas said. “You get breaks like that. It was too close for comfort, to say the least.”

Scotty Cameron Select Putters
A surprise from Tom Watson! | Priceless Moments with Mastercard
Last Golfer To Miss The Green Wins £1000!
This is Why I Never Start with the Club Behind the Golf Ball
Strydom wins Alfred Dunhill for 1st Euro title
Ads by Amazon
Ads by Amazon