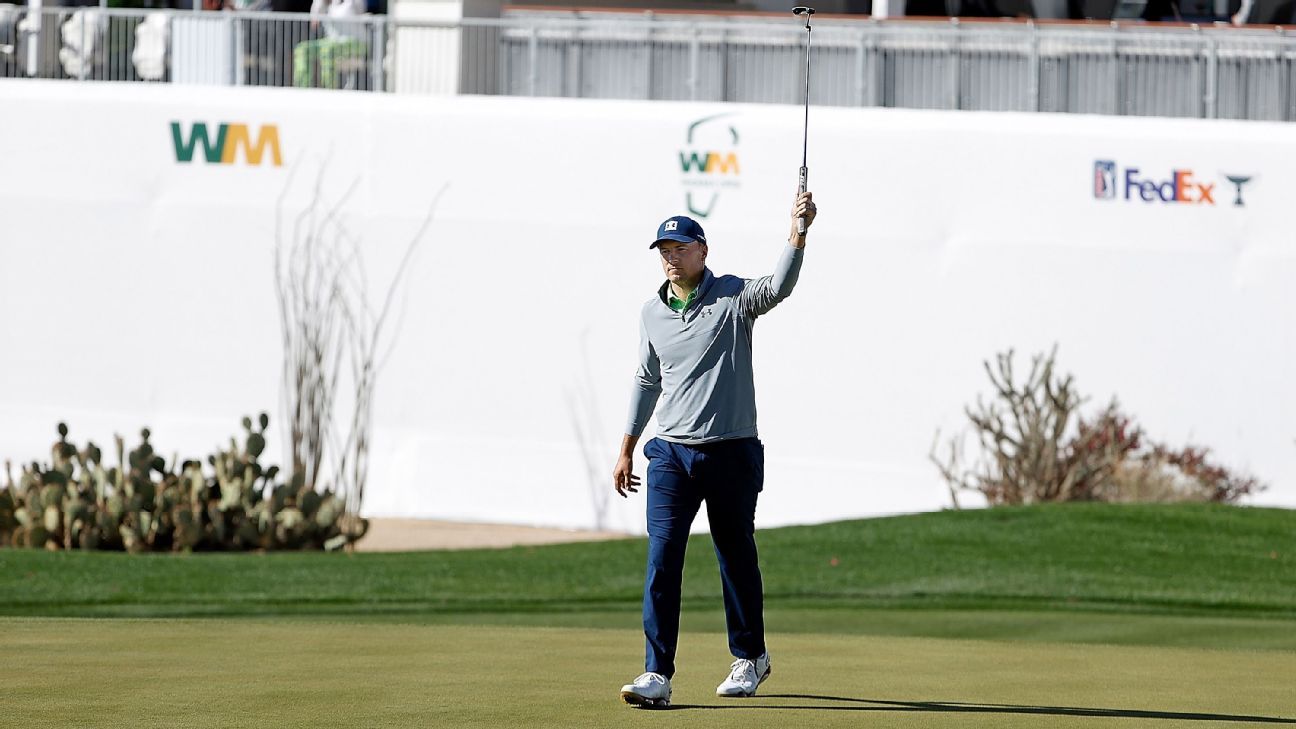 SCOTTSDALE, Ariz. — Jordan Spieth knows what it’s like to lead a tournament after 54 holes. It just hasn’t happened for a while.

“I expect myself to be extremely nervous,” Spieth said. “Again, I mean, I’ve been there a lot of times, but it’s been a long time.

“So, I imagine I’ll be very uncomfortable, at least to start. I kind of like that sometimes.”

Spieth didn’t expect to be in this position this weekend. He made the trip in “kind of a low spot” after missing the cut a week ago at the Farmers Insurance Open. He felt like he was making progress at Torrey Pines but had a bad back nine in the second round. He then opened this event with consecutive 67s. His goal was another solid round. Then he went out and posted 10-under 61, tying his career-low round on the PGA Tour. Spieth didn’t look at the scoreboard throughout the round and doesn’t expect to Sunday.

“I know I can get the job done based on a round like [Saturday’s],” said Spieth, who hasn’t finished in the top 5 in an event since the 2019 PGA Championship.

For now, though, Spieth will approach Sunday’s final round with the same goal he had when he entered Saturday: He wants to be 4-under for the day when he stands on the 17th tee.

Beyond that, as he’s said all week, he’s trying to trust his game and not have any expectations.

Jordan Spieth was up to his old tricks today 👀

His third round 61 matches the lowest round of his @PGATOUR career. pic.twitter.com/2xJbXPWepO

“I built some freedom now seeing these results the first few days here to where I feel really good about the path I’m on,” Spieth said. “I feel good about what the long-term ahead looks like for me. And sometimes that’s been in question, to myself.”

Saturday night’s dinner conversation will be, well, an interesting one for Justin Thomas.

When he sits down with roommates Rickie Fowler and Spieth, whom Thomas trails by four strokes, at their rented house in Scottsdale, the topic will “probably” be the Super Bowl. The trio will try to stay away from golf as much as possible.

“It’s not going to be forced,” said Thomas, who shot a bogey-free 7-under 64 on Saturday. “We’re very close, and we understand that over the course of a long career we’re going to have a lot of duels and battles.”

This isn’t new territory for Thomas. He shared a house with Fowler in 2019 when both were the final group. Fowler won and Thomas finished third, the same position he sits heading into the final round this year.

After two straight third-place finishes, Thomas feels he’s “getting close to shooting a really good one.”

He just hopes it comes Sunday.

“I just need to get in my own little world and really just shoot as low as I can,” Thomas said. “Funny thing about this place is if you don’t play well, you struggle. It’s hard to get it going. But if I play well, you really can — I mean, you can birdie every single hole.”

Sunday won’t be the first time Xander Schauffele and Spieth play in the final group of a tournament with a win on the line.

They last did it in 2018 when they were in a three-way tie, along with Kevin Kisner, heading into the last day of The Open at Carnoustie. However, neither played well in that final round with — Schauffele finishing tied for second; Spieth tied for ninth. That experience, Schauffele said, makes Sunday’s final-round pairing with Spieth comfortable.

“I think it’ll be fun,” Schauffele said. “We’re both trying to do the same thing. We both have a lot to prove. He’s accomplished so much in his career. I’m still trying to push forward and do kind of what he’s done in a short time.

“I think it’s cool that we’ll be hashing it out [Sunday].”

Schauffele has seven runners-up finishes since his last win at the 2019 Sentry Tournament of Champions. This is his fourth career lead or co-lead after 54 holes. He didn’t get a win in any of the previous times.

“This is good,” Schauffele said. “This is what I need as a player. I have not won a lot in my career. Got off a couple quick ones on Tour early and kind of lost my way for a second there.

“So, this is sort of what my team and I want, to be in contention, right there in the final group, and see how I can handle it.”

While 53-year-old Steve Stricker tried to stay in contention to become the fourth player to win a PGA Tour event in four different decades — and the oldest player to win on the PGA Tour — he pulled double-duty during his third round. As the Ryder Cup captain, he expects the guy he was playing with on Saturday, Schauffele, to be on that team.

“As I’m going around playing with Xander there and watching how good he is hitting it and long he’s hitting it — [he’s] bombing it — I thought about the Ryder Cup many times out there,” Stricker said. “That he’ll be a good guy to have on that team. He’s great to be around.

“And then to see Jordan play well and seems to be moving in the right direction for him, too. A lot of positives from the guys that are playing well.”

Stricker entered the third round in second place, a shot behind Schauffele. He lost ground Saturday with a 2-under 69. He will start Sunday five back.

“Hit a lot of quality shots,” he said. “Just didn’t make the putts that I had been making the last couple days.”

‘This week is a lot different’

There might not be a lot of fans this week at TPC Scottsdale, but, on Saturday, the few who were able to score tickets made their voices heard.

“All of a sudden, [on Saturday] when you kind of get in the thick of things and the crowd was feeding off and really willing those putts in with me, it actually kind of felt like nothing had happened,” Spieth said. “That was pretty neat.”

As has been the case all week, about 4,500 fans were allowed in on Saturday.

“So, this week is a lot different, but it’s just great to see fans back,” Louis Oosthuizen said. “It’s great to just play in front of people again.”

Jon Rahm was able to tell when he hit a good shot by the reaction. Also noticeable was the absence of boos.

“We miss the fans. I’ve missed the fans,” he said. “Even though it’s a very small percentage than we usually have here, it feels like a lot just because we haven’t seen them in a while.”

3 Simple Tips To UNSTUCK Your Swing! || Arm Connection
Robert MacIntyre tries to make a hole-in-one with 500 balls
3 POWER MOVES FOR LONG DRIVES
Highlights | Round 4 | Hero World Challenge | 2022
Tiger and Rory vs. Spieth and JT: What to watch at The Match
Ads by Amazon
Ads by Amazon