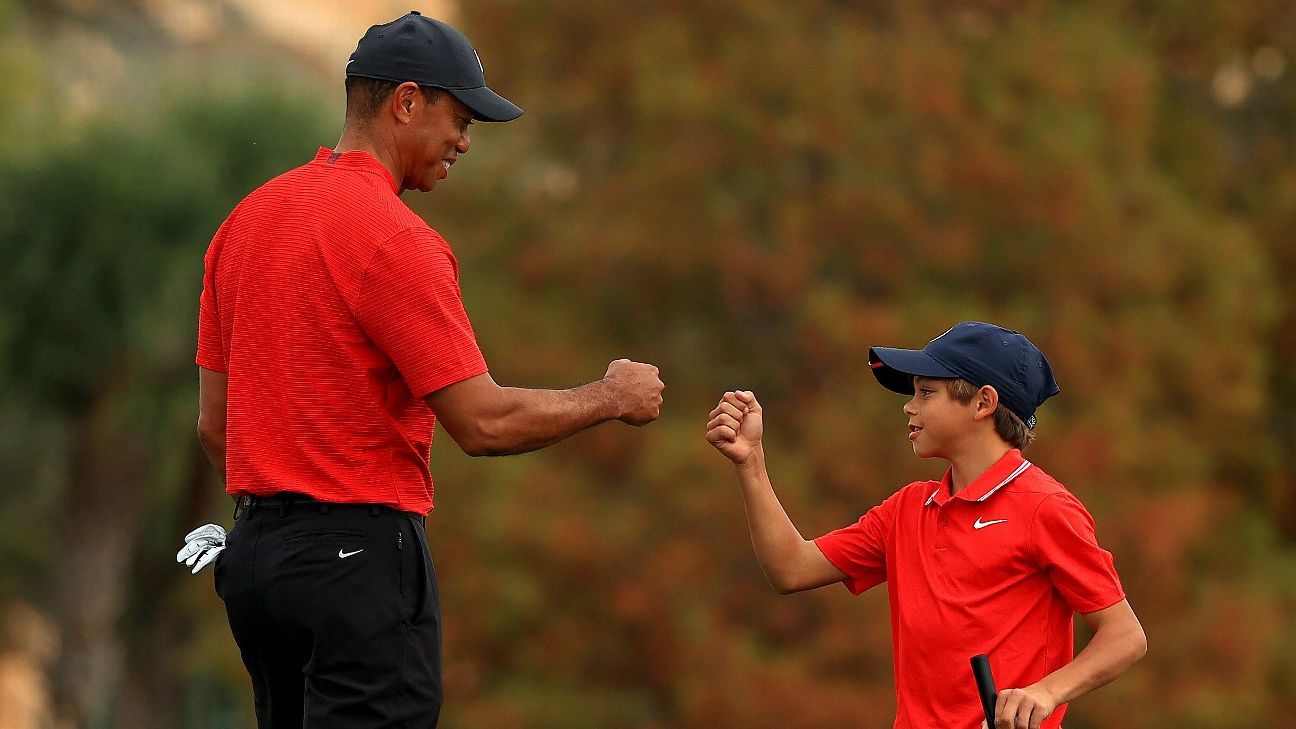 The burden of fame never faded, but Tiger Woods showed a softer side, a more appreciative outlook in the past few years. Never was that more than the case than in December, where the joy of a father playing golf with his son could not have been more apparent.

The PNC Challenge with Tiger and 11-year-old Charlie playing golf before a national TV audience will have to do for the foreseeable future. It was like witnessing a mini-Tiger for a couple of days, dressed the same as his dad, mimicking the walk, the mannerisms, the swing and even the fist pumps. Tiger glowed when Charlie made an eagle on his own ball on the first day of the event. He looked that way, too, as they wrapped up the tournament, the memory of a lifetime.

What happened Tuesday brought that all into focus as the details of significant injuries, especially to his right leg, came to light after hours of surgery following a car crash in which Woods’ vehicle rolled multiple times.

That Tiger emerged from it and was reported by his team to be alert is significant given the images we all saw of his car; the result could have been so much worse. Any talk of him returning to competitive action is simply venturing into dark territory, a place with no clear path. It is impossible to know now what is ahead for him, both in the coming days and weeks, as well as into the future.

“I think the only thing that really matters now is his well-being, his recovery, his family, the level of support that we provide to him,” PGA Tour commissioner Jay Monahan said at The Concession, site of this week’s World Golf Championship event. “Listen, when Tiger wants to talk about golf, we’ll talk about golf, but I think right now the entirety of our efforts needs to be around the support.”

By Thursday afternoon, shock and dismay at the WGC Workday Championship had turned to reality and relief. There was still disbelief, followed by the realization that Woods was in bad shape. There, too, was the important truth that he is alive.

Of course, he won’t be out here among the players anytime soon, and the knowledge that the game’s biggest star will be missing from action is a stark reminder of what he brings to the sport.

“He means a lot to the players,” said Brooks Koepka, who was in a memorable duel down the stretch with Woods in the 2018 PGA Championship at Bellerive. “He means a lot for the tour. He’s the one who brings the fans. He’s the whole reason probably 90% of us are out here playing. The only reason the sponsors are here is because of him.

“The tour — everything they’ve done is basically because of Tiger. Without him our game is a long way behind. So, everything we do is because of him.”

It comes at a time when it was clear Woods was reaching a different stage of his golf life. He enjoyed the banter among other competitors, something he shunned with a passion in his prime. He loved giving players a hard time, making jokes, and taking it in return.

Several years ago, before all of Woods’ injury woes, I had the rare opportunity to speak with him at length during the pro-am for a European Tour event in Abu Dhabi, United Arab Emirates. There was but a smattering of spectators following, and the subject of the players Woods had consulted for advice in his younger days was one he had embraced.

In his first visits to Augusta National in 1995 and 1996, and again the year he won it for the first time as a pro, Woods sought out the legends of the game. He played with Jack Nicklaus and Arnold Palmer, Seve Ballesteros and Greg Norman. He sought chipping advice from Raymond Floyd and Jose Maria Olazabal. He soaked it all in.

And then he asked: “How come I never get questions from the young guys?”

My response: “Because they are afraid to ask.”

The wall Woods built up around him was often impenetrable. There was little conversation. Only the closest of the close got to know him.

That ice eventually began to melt after he returned from the spinal fusion surgery to play a full schedule in 2018. Woods knew that procedure was no guarantee. In fact, at one point, he admitted, “I thought I was done.” He embraced this opportunity to play again. He was buoyed by the young guys in his South Florida neighborhood — Justin Thomas, Rickie Fowler — who were suddenly bugging him to play and picking his brain.

For those who got to play with him for the first time, they got an experience they’d never forget.

Austin Cook, then in just his second year on tour, played with Woods in August at the Northern Trust and sensed by the scores after three rounds he might be playing with Tiger.

“When I saw the message come through that I was paired with him, I had to take a deep breath,” he said. “I knew I’d be nervous. I was going to be teeing off in front of the guy I had always looked up to, my idol on the golf course. I will always remember that.

“He was a really nice guy. He answered my questions, started some conversations, never big-dogged me. For a guy in his position, I understand. It was pretty cool.”

Woods was self-deprecating about all the attention, saying then “it just means that I’m old.”

But he clearly understood what it meant to them, posing for photos after rounds, signing autographs for the guys he just played against.

That summer, Woods was bitterly disappointed when he was unable to hold onto the lead at Carnoustie, where he led The Open into the back nine but eventually tied for sixth. His daughter, Sam, was there, as was Charlie. They were old enough to understand what their dad did for living.

“I know that they know how much this championship means to me and how much it feels good to be back playing again,” he said.

And he won again, grabbing the 2018 Tour Championship for his 80th career victory. Then, of course, came the epic victory at Augusta National in 2019, his fifth Masters win and 15th major title.

“I don’t think people to this day realize the struggle and the things he had to deal with to get to that point to win Augusta in 2019,” said Rory McIlroy, who recalled a 2017 lunch with Woods following the fusion surgery in which Tiger could barely get up to walk. “Look, I don’t want to take anything away from what Ben Hogan did after his car crash or any of the other comebacks that athletes have had in other sports, but right now I can’t think of any greater comeback in sports than the journey that he made from that lunch we had in 2017 to winning the Masters a couple years later.”

Woods was back, and Justin Thomas and Rickie Fowler and some of the others he played with in South Florida enjoyed getting to know their idol. They sought his counsel, and unlike those times earlier in his career, Woods was willing to share his knowledge.

The fact that he opened up to the masses more, not just fellow players but also fans and media, gave a clear indication he was grateful for a chance that he once thought impossible.

Things went a bit sour in 2020. After an incredible end to 2019 with an 82nd PGA Tour victory and starring role at the Presidents Cup, Woods fell off. His back began to bother him more frequently. The pandemic interrupted the season. He never got comfortable playing without fans. Eventually, another back procedure was required.

Before that microdiscectomy, however, he played in the PNC Championship with Charlie, who has since turned 12. Tiger was hurting. His son became the star of the show. It was revealing to see Tiger share a rare personal side. Uncomfortable talking about it, Woods nonetheless beamed with pride.

The hope was that the improvement in Charlie’s game — they had played often together during the pandemic — would push Dad to make sure his own game remained sharp.

Now, though, we are left with those pleasant images of Team Woods in red, with the beaming smile and fist bumps and good times. And we are left with a long time to wait and wonder if we will ever see Tiger Woods play golf again.

Robert MacIntyre tries to make a hole-in-one with 500 balls
HOW TO HIT DRIVER WITH RICK SHIELS CLUBFACE EDITION
This is Why Your Golf Swing Lacks Distance (Chicken Wing Swing Fix)
GOLF: Why Amateur Golfers Can’t Hit Driver Farther (BACKSWING)
A preview of 2023? Sahith Theegala sure hopes so after pulling out the QBE Shootout title with Tom Hoge
Ads by Amazon
Ads by Amazon