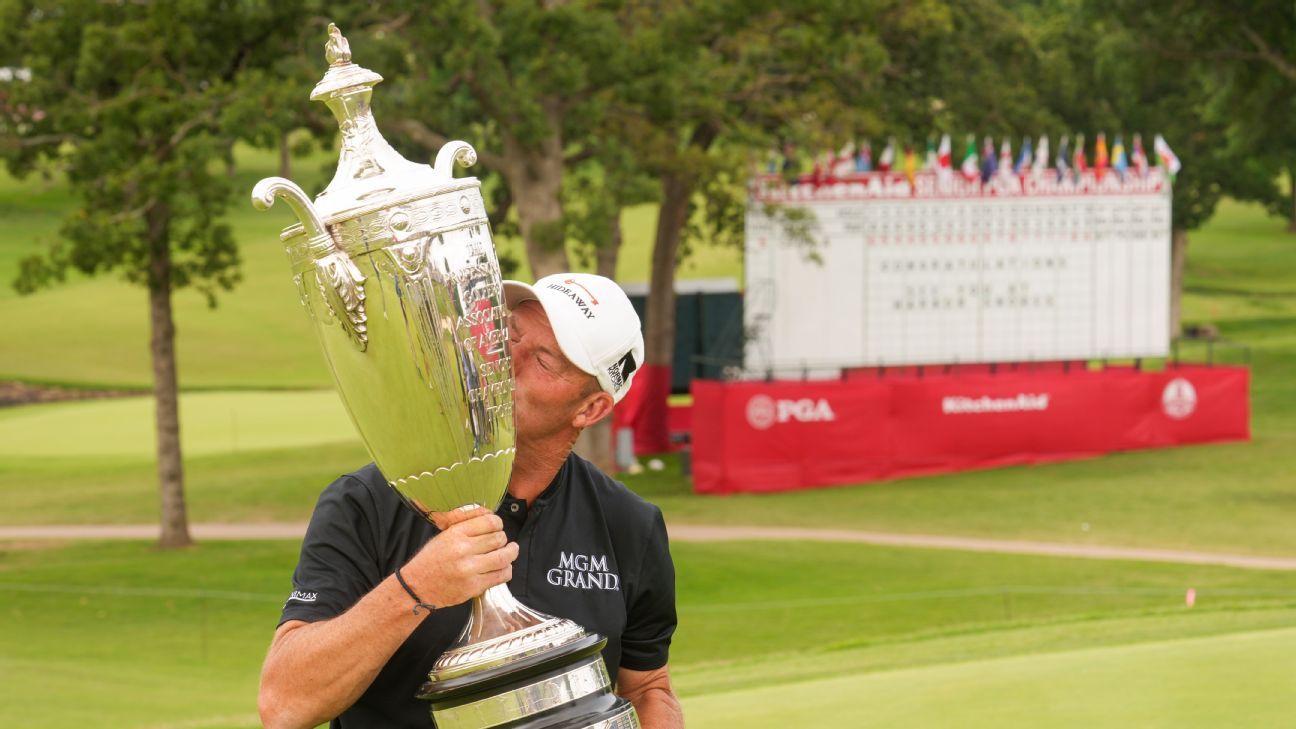 TULSA, Okla. — Alex Cejka won the Senior PGA Championship on Sunday for his second straight major championship, thriving on accurate and powerful ball-striking and deft touch around the demanding greens at Southern Hills.

Cejka shot a 3-under 67 for a 4-stroke victory over Tim Petrovic, three weeks after he beat Steve Stricker in a playoff in the Regions Tradition in Alabama.

“It’s incredible,” Cejka said. “Seeing and knowing all those names who are up there on the trophy and being on the trophy myself, it’s a dream come true. … Monday when I played for the first time here, I walked those fairways and remember seeing this on TV in all those years, and I can’t even describe how it feels to be here and touching the trophy. I’m just super blessed. I’m super happy. It’s an incredible feeling right now.”

Cejka fled the Czech Republic with his father at age 9, settling eventually in West Germany, where he took up golf and turned professional at age 18.

Stricker had a 1-shot lead going into the final round, and many expected another duel to the finish. That duel vanished early, with Stricker’s usually reliable putting failing him greatly. He missed seven putts inside of 8 feet, and his ball-striking also was off, leading to a 77 that dropped him into a tie for 11th.

After a birdie at the first, Cejka had a nervous bogey-bogey stretch on Nos. 2 and 3. But with Mike Weir and Stricker making a mess of things around him, he steadily pulled away with birdies on Nos. 5, 7, 11 and 12.

From there Cejka held on, getting up-and-down from greenside bunkers and overcoming a water ball on the par-5 13th that led to his only bogey on the back nine. He also drove into a creek on the par-4 10th but, after taking a drop, hit his third shot to 6 feet and saved par.

Cejka said seeing what was happening to Stricker and Weir early was a shock to his system. Weir started the day three shots back and shot 72.

“I was actually almost in shock, which threw my game off totally,” he said. “I was expecting him [Stricker, who began the day at 6 under] to come out and just put so much pressure on, as great a player as he normally is. But it’s golf.”

Cejka won three times on the European Tour in 1995 and a fourth event in 2002 before moving to the United States. He played the PGA Tour from 2002 to 2011 before losing his status but regained it in 2015, the year he won the Puerto Rico Open for his lone PGA Tour victory.

He joined the PGA Tour Champions without enough career money winnings for full status and was an alternate into the Tradition. He also finished second in the Chubb Championship in April. He now not only has earned full status but also will be back at Southern Hills in 2022 for the PGA Championship, for which he will be slightly younger than defending champion Phil Mickelson.

Petrovic also closed with a 67.

“I just put the blinders on and play my game,” Petrovic said. “I think that’s been the key for me in all these runner-up finishes. One of these days I’ll punch one through.”

Bernhard Langer, Jerry Kelly, Paul McGinley and others waited on the first tee to congratulate Cejka on the torrid start to his senior career and the impressive performance at Southern Hills.

“After he won Regions Tradition, you know, he was really meaningful in saying, ‘I finally feel like one of you guys,'” Kelly said. “Now he’s been a great player for a long time and he’s put in so much time. He’s playing the Outlaw Tours in Arizona. He’s played everything he can. He never gave up, and this is the reward that’s happening right now. I mean, I think it’s an awesome story. He’s a great guy. He works his butt off. He keeps his head down and goes and gets it. I think it’s awesome.”

Retief Goosen, the winner of the 2001 U.S. Open at Southern Hills, had a 66 to tie for third with K.J. Choi at 3 under. Choi briefly tied Cejka for the lead after four birdies in his first seven holes before settling for a 68.