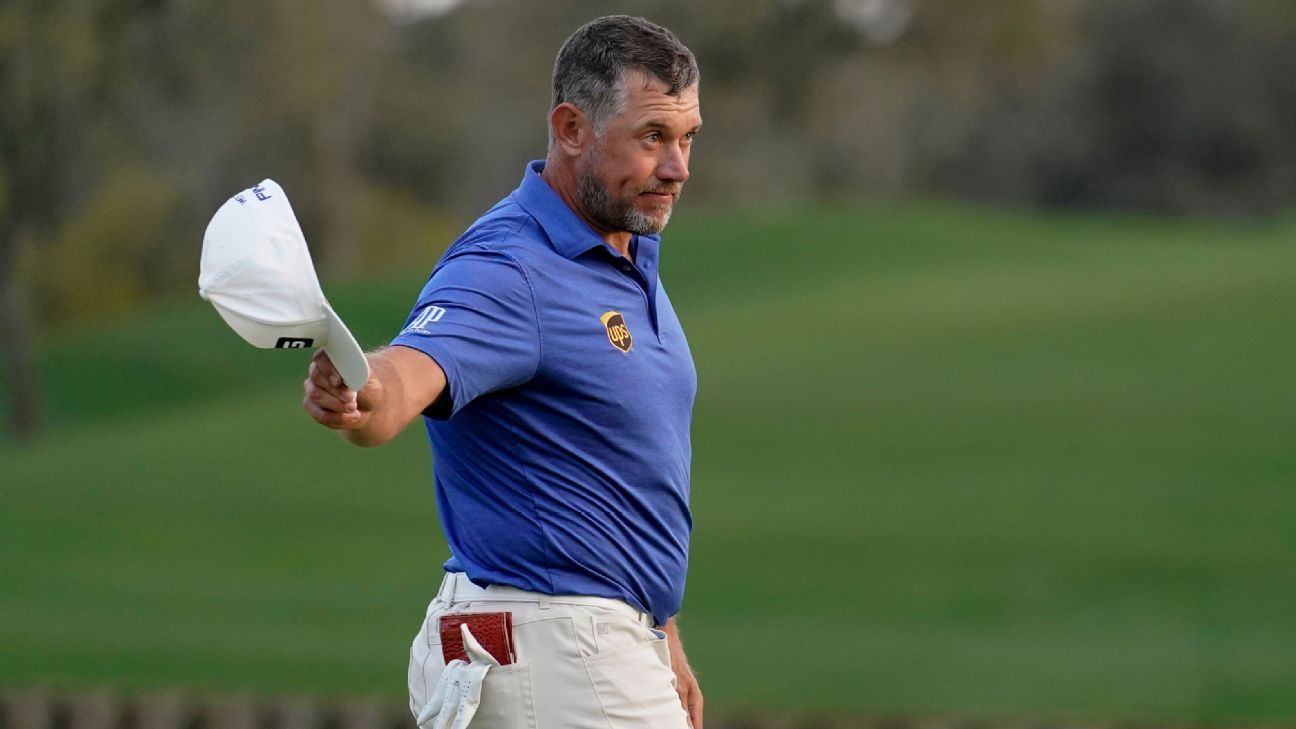 PONTE VEDRA BEACH, Fla. — With apologies to a couple of pretty nice events in the United Arab Emirates, Lee Westwood is on the verge of the biggest victory of a long career that has seen him win all over the world.

There’s still 18 holes to go. Plus, he’s got to stare at Bryson DeChambeau‘s biceps for another four-plus hours on Sunday.

But Westwood has given himself a two-shot advantage heading into the final round of the Players Championship. A victory at golf’s so-called “fifth major” would be as popular around this sport as in the pubs of his native of Worksop, England.

In 2020, at age 47, Westwood was the oldest winner of the European Tour’s Race to Dubai. He won last year in Abu Dhabi and captured the season-ending Dubai World Championship in 2009.

He’s played on 10 European Ryder Cup teams; he’s been on the winning team seven times. He’s earned 23 points and being named captain is in his near future.

“Undoubtedly,” he said when asked if the Players would be tops in his career. “It would be the biggest tournament I’ve ever won.”

There’s some irony in all this. A decade ago, Westwood skipped the Players — he was ranked No. 1 in the world at the time. He was not a member of the PGA Tour at the time, instead playing primarily on the European Tour. It was seen then as a snub to the PGA Tour, skipping its marquee event because he did not want to travel to the United States for just one tournament.

“I’m certainly having as much fun on the golf course as I’ve ever had. That probably is helping me play some great golf.”

A week ago he took DeChambeau to the 18th hole at the Bay Hill Club, finally falling a shot short when the long-hitting U.S. Open champion drained a nervy putt for a one-shot victory at the Arnold Palmer Invitational.

The 20-year difference in age or the sizable length difference off the tee compared to DeChambeau didn’t bother Westwood. He has stressed he is simply enjoying the process and not focusing so heavily on the results.

“I think Helen is a big part of it,” DeChambeau said, referring to Westwood’s caddie and fiancé Helen Storey. “She’s keeping him steady and level-headed. She’s a rock. Keeps his mind focused on the right things. She’s been awesome for him. And that’s one of his secret weapons, I think.”

Storey has been his caddie nearly full-time since 2018 — he’s occasionally used his son, Sam — and the partnership has produced some nice results. Westwood is now ranked 31st in the world, the highest he’s been since 2014.

“I think at my stage of my career there’s not a lot a caddie can tell me” he said. “But, obviously, Helen gets me in a fantastic mood out there. Psychologically she can help me and say the things that I need to hear. She helps me in that aspect an immeasurable amount.”

He remained patient Saturday after making nine straight pars to start the round. Westwood then made birdies at the 10th, 12th, 16th and 17th holes. He had no bogeys and goes into another Sunday on center stage. The big stage, though, is where the problems lie.

He has 25 European Tour wins, which ranks eighth. He has 44 professional wins. But he also has never won a major despite nine top-10 finishes, including 12 top 5s.

In 2008, when Tiger Woods, on a broken leg, made a birdie putt on the 72nd hole to force a playoff with Rocco Mediate, Westwood was the forgotten character in all that. He missed a putt right before Wood rolled in his that would have gotten Westwood in the Monday playoff. In 2009, when 59-year-old Tom Watson nearly won The Open before losing in extra holes to Stewart Cink, it was Westwood who missed out on the playoff by a single shot. In 2010, when Phil Mickelson hit his memorable shot through the trees at the 13th en route to a Masters win, it was Westwood who finished second.

Westwood would not go so far as to say winning on Sunday would be equal to winning a major.

“This is such a prestigious title and a big tournament to win,” he said.

At age 47, though, it would be incredibly sweet.